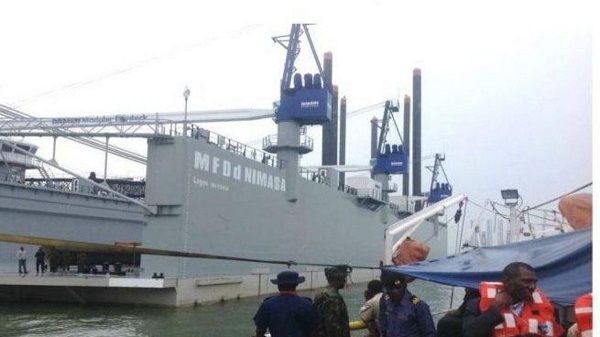 ·  The project was flawed from outset –former NIMASA Director

Amid criticisms on the handling of the Nigerian Maritime Administration and Safety Agency’s (NIMASA) N50billion modular floating dock, hopes that a public-private partnership (PPP) will be struck to salvage the asset have been quashed with allegations that NIMASA lacks legal backing to do so.

One of Nigeria’s foremost maritime lawyers, who drafted a lot of bills in the sector, revealed this during an exclusive chat with MMS Plus newspaper recently. Meanwhile, in Abuja, several shipping companies are jostling for the opportunity to maintain the NIMASA floating dock.

The partnership between NIMASA and the Nigerian Ports Authority (NPA) in the bid to put the floating dock into a state of operational readiness for commercial activities, has been criticized with suggestions that a private-sector operator with relevant technical capacity would be better suited to make the floating dock operational using a sustainable commercial approach.

The source, who preferred anonymity, stressed that the NIMASA Act empowers it to play the role of a regulator and not an operator.

Although a lot has been written on the complexities surrounding the NIMASA floating dock, the veteran lawyer said, “Is NIMASA a regulator or an operator and specifically the operation of a ship repair facility?”

“There could be conflict of interests amid issues as a regulator and an operator. Will the agency be in a position to regulate and monitor its activities as an operator? We could approach this from a regulatory compliance and corporate governance angle. Does the NIMASA Act empower the agency to be an operator? The regulatory powers and functions of the Agency will not even accommodate a PPP,” the source said.

Describing the investment as a wrong-headed venture, the legal expert said; “The then leadership of NIMASA either did not understand the role of the agency or they didn’t care about flouting the laws because there will be no backlash.”

The source admonished the agency to dispose off the asset because NIMASA isn’t empowered to operate a ship repair facility, while stressing that the apex maritime body focuses on its arduous regulatory functions.

“PPP is a partnership. The agency cannot be a partner in a concern that it does not have the powers to participate in, under its laws. They should dispose of the floating dock and return the proceeds to the government where it came from. Government’s provision through the NIMASA Act empowers the agency to sell/dispose of properties. It has to follow the approved process,” the source stated.

Meanwhile, our correspondent checked relevant portions of the NIMASA Act 2007, Section 23 which focuses on the powers of the agency. In sub-section 2, NIMASA’s powers include, (a) to enter into contracts; (b) to acquire, hold and dispose of real and personal property; (c) to join in the formation of companies; (d) to enter partnerships; and (e) to let or hire plant, machinery, crafts, equipment or goods of tile Agency not immediately required by the Agency; and (j) to do anything incidental to any of the powers specified in this subsection or otherwise conferred on the Agency.

However, sub-section 3 gives conditions for such contracts or partnerships which show a limitation to government agencies, other tiers of governments and foreign governmental bodies. “Where the Agency may provide a facility or service, or discharge a function, the Agency may do so: (a) itself; (b) in cooperation with another person; or (c) by arranging for another person to do so on its behalf. (4) In subsection (3) of this section “person” includes: (a) the Federal Government of Nigeria ; (b) a State Government or that of the Federal Capital Territory; (c) the government or an Agency of the government of a foreign country; and (d) any juristic or natural person.”

The N50billion NIMASA floating dock, which continues to raise concerns in the sector, remains abandoned alongside the Nigerian Naval Dockyard, Wilmot Point, Victoria Island, with its classification suspended due to lack of maintenance and overdue statutory surveys.

This valuable marine asset that was intended to boost the nation’s ship repair capacity and transform Nigeria’s maritime industry for wealth and employment creation is estimated to be losing a potential revenue of over $18million (N7.2billion) annually.

Speaking with our correspondent on the situation of the NIMASA floating dock, the President of Ship Owners Association of Nigeria (SOAN), Dr. Mkgeorge Onyung said, “It seems the government acquired this floating dock without going through a proper public procurement procedure. If it did, we shouldn’t have to whine over issues as to where and how to deploy the asset.”

According to Onyung, there shouldn’t be a problem utilizing the floating dock if the preparation wasn’t faulty or incomplete.

He argued that if an ideal approach was utilized, a Nigerian company should have entered into partnership with the foreign partners to construct and operate the facility.

“Where would our upcoming seafarers work when we continue to manage scarce maritime assets this way? How do we want posterity to judge us, if we can’t gainfully utilize the floating dock?” Onyung queried.

Contrarily, a former Director, Shipping Development at NIMASA, Capt. Warredi Enisuoh has debunked claims that the agency didn’t have a clear focus for the project.

According to him, the then NIMASA leadership factored the floating dock in a comprehensive plan.

“Those who built have the complete blueprint. The whole project was end-to-end. Tell NIMASA to produce the plan. There was a plan for that floating dock,” Warredi said.

Also speaking, a former Director of Financial Services at NIMASA has lamented that the floating dock was doomed to fail from the outset, describing the financials as “bad from conception”.

His words: “As Director of Finance, I would have canceled it, or recommended it as the project was still in its infancy. But I was an outsider to the subject of floating dock because it was under the purview of the Director of Shipping Development.”

“When I became DFS and did the financials I was told we had a binding contract with offshore components and arbitration was a no brainer. The cost was not going to give an industry based Return on Investment (RoI). Let’s just hope it can be salvaged and not become a relic but it’s a tough call.”

The NIMASA Modular floating dock measuring 125m by 35m with three inbuilt cranes, and a maximum lifting capacity for vessels up to 5,000 deadweight tonnes and up to 50 tonnes per meter keel load, for smaller size vessels and tug boats, was built in Damen yards at Rotterdam in the Netherlands and Galati in Romania in line with contractual agreements entered into by the administration of Mr. Patrick Akpobolokemi and Nairda with fabrication to commence in 2014.