Customs FoU Zone B Hands Over Seized Drugs To NDLEA 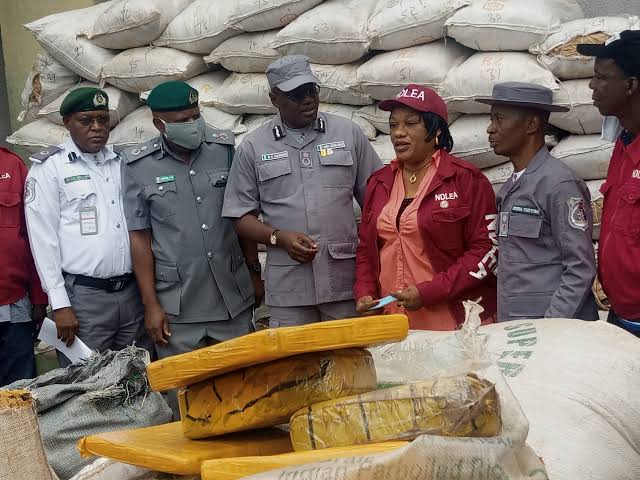 The Nigerian   Customs Service(NCS)   Federal Operations Unit (FOU) , Zone ‘B’, Kaduna  has handed over 70 parcels of the Cannabis Sativa, which it seized , to the    Nigerian Drugs Law Enforcement Agency(NDLEA), in the spirit of inter agency cooperation.
It also impounded other 131 different goods ,worth N690, 821,657.94  in  Duty  Paid Value(DPV)  in several  locations, within its jurisdiction, between August 25, and October 27, 2022.
The Controller of the Unit , Comptroller Albashir Hamisu, who did the handing over , during a briefing,  attributed the success of the Unit to the sharing of intelligence with it  by other sister agencies and effective performance management.
He further enjoined the citizens to volunteer information to stem the menace of smuggling in Nigeria.
While taking delivery of  the parcels of Cannabis Sativa from Comptroller Hamisu, the  representative of the Commander  of NDLEA ,in Kaduna, Assistant Commander of Narcotics (ACN) Ado Ali Kubau, said he   commended the Unit for its  zeal and commitment , despite the technicalities and complexity of seizing  drugs.
Comptroller Hamisu disclosed that the seized goods , include 749 Bags of 50Kg Foreign Parboiled rice, 758 bales & sacks of foreign second hand clothing, 533 cartons of foreign made  spaghetti & macaroni, 473 cartons of foreign pharmaceuticals, 245 pieces of used tyres, 221 litres  of premium motor spirit (PMS) and 116 cartons of foreign female shoes .
Other   items   according to him, are  20   Units   of   used   imported   vehicles,   four    means   of conveyance, 65 Bags of 25Kg  of foreign parboiled rice, 14 cartons of foreign body cream, 8 sacks of foreign used shoes and  9 bales of foreign second hand bags.
Hamisu  also listed  12 cartons of foreign cigarettes & tobacco snuff, 59×5 litres of  foreign vegetable oil, 10 x25litres  of foreign vegetable oil among the seizures.
Share