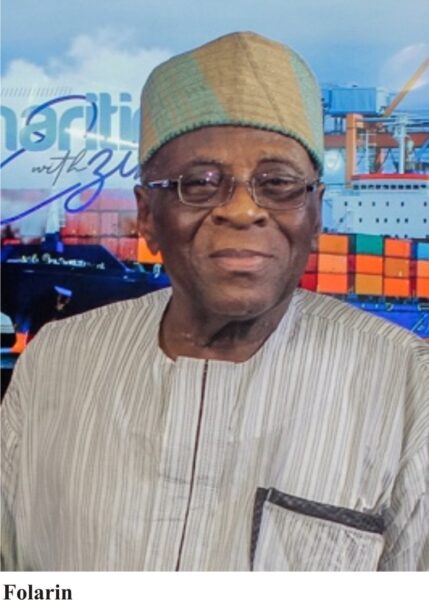 In 2006, the face of Port   operation and by extension the maritime industry was   reconstructed and restructured following the  concession of the ports.The Bureau of Public Enterprise (BPE) was saddled with the responsibility of concessioning  the ports,and they effectively carried out that duty,thus paving the way for the present state of the ports and the maritime industry today.

17 years after this process that  left bad taste in the  mouth of some and honey in others , industry watchers and stakeholders are putting the whole gamut of concession into perspective, more so when the Nigerian Ports Authority recently threatened to revoke  the licences of some concessionaires.While  some stakeholders give credit to the reform, others consider the whole process a  failure.MMS Plus had a chat with the Chairman, Nigerian  Ports Consultative Council (NPCC),Otunba Kunle Folarin.He spoke extensively and expansively on the subject of concession and other topical issues in the maritime industry.Excerpts.

17 year after port concession, will you say concession has been a blessing and what have we achieved under concession?

What are the issues in the industry that relates to cargo handling? Concession is only cargo operations. We have harbors in the port, pilotage and all the rest of ships, clearing and forwarding, and customs so if you are talking of concession, it affects only cargo handling operations and terminal operations. There are several other issues that affect the port competitiveness and ports  being able to meet the challenges of a port.

We have the customs with the scanning issues, they refused to use the scanning machines.You have the certication agencies such as the NAFDAC, SON, who are also intervening in cargo processing. They all also contribute to the success or failure of  port concessionAlso, lets look at the issue of harbour services which is pilotage and towage,   how has that one performed?  it’s only when the ship gets to the terminal that it will work. And it’s the work of the concessionaire to receive cargo and deliver cargo. How is Harbour services delivery? This is NPA’s  problem. How is customs  with cargo release? Are they releasing cargo, are they examining cargo when it is due? So those are other issues. Then customs  documentation, you must have been hearing about the issues they are having with the clearing agents. Then the clearing agent again, what is their performance level?The shipping agents, what is their performance level? Concessioning is not only the terminal operations, it is only when customs do their work that terminal can deliver under concession. Nobody can deliver cargo without customs  release. And customs will not release without examination. And they cannot do examination physically for 2 million containers without using scanners. How are  they using scanners, have they installed scanners in every Port in Nigeria?

Would you then say concession  is a success or a Failure?

Of course,  it’s successful. Before the terminal operators came, how many days does it take to deliver cargo? Three weeks, four weeks in NPA terminals. What were the port charges under  NPA?  So  many issues have been solved by the terminal operators, let’s face it. They have their own shortcomings but we have to look at pre-concession and post-concession era. As far as I am concerned, it has been a success.

Have you read the port  concession agreement yourself?

An agreement has obligations on both parties. If you are a landlord don’t you have obligations to your tenants? And the tenants also have obligation to you. So before you  conclude on a verdict  because there are  problems with about  3 out of 26 terminal operators, does it mean it’s a failure? If 25 pass out of 28 is it not a success?

If three people are not living up to standards, that’s a different thing, it is expected. They should come up with  why they are not meeting up. Is their quay board repaired, is there 24hrs lightening in the port for them to operate 24hrs a day? You must also go to the concessionaires  and ask what are their problems or challenges. As far as I know, the concept of concessioning is a success. There can be lapses here and there but they can be corrected. There is also an agreement which gives obligations to both parties and which they will deliver.  It’s only when a party delivers  that he can now come out and say I have done my part and you have failed.The DG of NIWA has come out to say that Nigeria is targeting 2 million   containers traffic  by  2025, how feasible or realistic is this?

The 15% NAC levy, agents are kicking against it and as a result of that, they are saying they will embark on another strike to press home tiheir demands, so what’s your take on that.?

The clearing agent right?Yes sir, in fact they are saying it’s illegal and won’t pay.

Then let them go to court, it’s very easy, you don’t have to go on strike or withdraw services. But for me, 15% is a high amount,  lets face it. This is a developing country we cannot be discouraging our import by putting high levy. But I think they should not go on strike, I agree that it’s high. Rather than go on strike,they should continue to dialogue and if it is illegal they can go to court and trash it out.

There is a report making  the around that House of Representatives is investigating  NPA over none remittance of multi dollar amount  to the federal government.?

Recently customs resolved the issue of VIN valuation and it appears everybody is on the same page as the VIN valuation is reintroduced, what is your take on this?

Well, the Nigeria Customs Service is to facilitate trade, is to promote trade. It is when you promote trade that Nigeria government or people will get the benefits of either patronage from foreign entrepreneurs, foreign shippers and also by our export through the port to foreign consumers of our special products and other products. So that is very important to bear in mind. So we cannot promote and face only revenue generation one way without looking at revenue generation the other way. What is very important is that trade facilitation is key to growing a country, it’s not by bringing draconian rules the way the customs are doing today. Draconian rules that will not promote trade that is not good. To generate money for government is good but you cannot kill that enterprise that provides that money generation for government.

On that note sir, the agents are unhappy that they are being over tasked and that hinders trade facilitation as you rightly mentioned, what should customs do, what should the agents do and what should government do to bring solutions to these problems?

Well, it’s very simple.Go back to the drawing board and find out why are we increasing VIN, why are we enforcing this level of VIN, is it for revenue generation alone, is it to get money to improve customs services?  So those are the things, customs should go back because if you generate money for the government that’s good, but if you don’t use the money to promote the work of your services that will make the patronage of your customers, by clearing agents, importers and exporters easy, then you are not getting it right. You have to go back to the drawing board whether there are other ways of raising revenue than increasing VIN.

Some agents are even accusing customs for the hardship that Nigerians are experiencing, what is your view on this?

Well, I have just said that if the VIN is too high and the clearing agents said they are going to beat it, they are just agents they will pass it to their principals, those who are giving the jobs to them to  do. And when those goods are imported with a high tariff, high charges or rate, then the customer will pass it to the consumer, the people on the street, so that is hardship; so they are right on that.You see, when we look at performance in the port, we should not be looking at only one part, we should look at the people who are either regulating in the port or operating in the port. That is the sum total of what we are talking about. The hardship you have just mentioned, so if the services provided by NPA is affecting the terminal operators, the terminal operators which are the concessionaires it means they  are not fulfilling their own parts of investment in the port because they are to invest in the port as well as provide equipments that will facilitate the work of the port.If the work of the port is facilitated, you can see that prices will go down. In fact, there will be no increase in tariff for a long time to come. So the discussion should centre on the whole team that provide services in the port.

Previous Air Transportation In Africa: A Quest For Rebirth
Next Faces At LeLook’s Bags Academy Commissioning