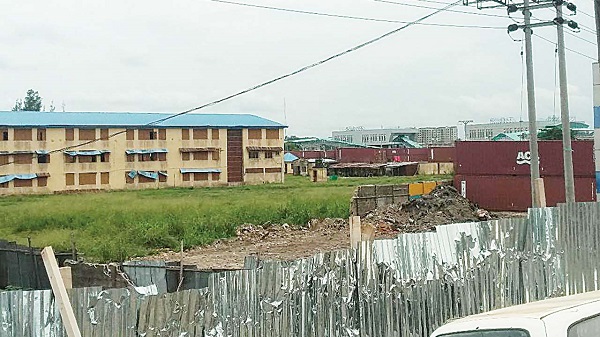 It was gathered that the shipping firm that bought the land planned to use the place as a bonded terminal. Before the Environmental Taskforce cleared the spot in March, the aforementioned land was partitioned and used by miscreants, members of the National Union of Road Transport Workers (NURTW), Vehicle Inspection Service (VIS) and the Lagos State Traffic Management Agency (LASTMA).

Before going into the complex to chase out the occupants, operatives of the Lagos State Environmental and Special Offences had given the occupants a seven-day ultimatum. And the night the ultimatum elapsed, chairman of the agency, CSP Olayinka Egbeyemi, led the enforcement team in an over-night exercise to remove all illegal structures comprising of shanties, mechanic workshops, containarised kiosks and commercial bus garages.

Egbeyemi claimed then that the removal was as a result of numerous complaints and petitions by residents, particularly management of the public schools within the school complex that criminal elements have turned the area into hideouts/spots for carrying out nefarious activities, thereby making the environment unpleasant for living or learning.

When media source visited the complex, it was told that it was a shipping company that was working on the said land and it plans to build a bonded terminal on the land. It used containers to form a barricade on the section it planned to use as bonded terminal. If schools were in session, no students would have been able to gain access to the schools through the main gate with the manner the containers were placed to form a circle. The students would need alternative gates to access their schools as the containers were placed in such a way that the gates to each of the schools can no longer be accessed.

There was an allegation that some persons in the Ministry of Education gave out the land. It was also learnt that the operation carried out by the task force in early March, which led to the ejection of the former illegal occupants was sponsored and aimed at making the parcel of land available to the shipping company.

When media source contacted the Public Affairs Officer of the Ministry of Education, he said Office of Education Quality Assurance (OEQA) is in the better position to respond to the issues and allegation. The Public Affairs Officer of the OEQA, Mr. Olaniran Emmanuel, promised to get back after he was briefed. He did not get back. On Monday, a reminder was sent to him, he did not reply. Yesterday, he did not pick his calls, neither did he respond to the messages sent to his phone.

Also, the Lagos State Ministry of Physical Planning and Urban Development was contacted on Friday, the Public Affairs Officer promised to get back, he did not get back, nor responded to the reminder sent to him. Thereafter, the agencies under the ministry were contacted, the Lagos State Physical Planning Permit Authority and Lagos State Building Control Agency, they promised to look into the issue. One of them got back to say the place was sealed some days back, as the land belong to the public schools, but the company refused to stop work claiming it has state government backing.