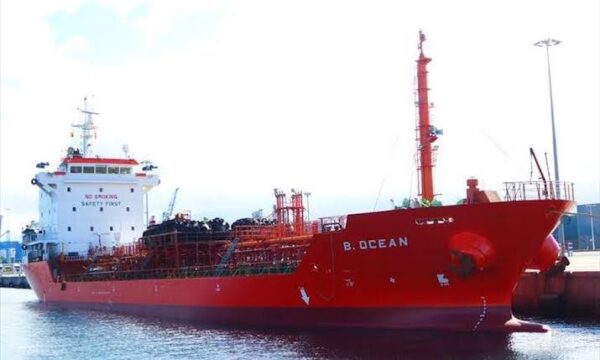 Barely 120 hours  after the Secretary General of International Maritime Organization (IMO) praised Nigeria  at the just concluded  Nigeria International Maritime Summit(NIMS),2022, for  recording no piracy attacks in  the Gulf of Guinea, in the last one year, pirates have smashed that claim, following the highjack of a Korean tanker vessel, B Ocean in  the GoG, on Wednesday.
This was disclosed by a piracy reporting body ,Maritime Domain Awareness for Trade Gulf of Guinea (MDAT GoG), which had reportedly said communication had been lost with the 5,700-dwt B Ocean (built 2010) on Wednesday night, but its fate was unclear.
Security company, Ambrey said on Friday: “It was subsequently confirmed that pirates had boarded the vessel, cut communications, and had stolen cargo.”
While the crew was reported to be safe, another security company, Africa Risk Compliance (ARC), said the vessel was released on Friday morning.
According to reports the gunmen destroyed navigational and communications equipment. However, the crew reached the citadel and alerted authorities.
Reacting to the incident South Korea’s Ministry of Foreign Affairs also said today (25 November) that the crew on a South Korean-owned oil tanker has been released unhurt after the vessel was hijacked on 24 November.
Meanwhile an  Italian navy ship has established contact with the master and was underway to provide assistance.
MDAT GoG, a joint operation between the British and French navies, asked  masters in the area to report any sighting of the vessel, or any suspicious activity.
Explaining the incident, ARC said contact was lost at 23:00 hours, 240 nautical miles (445 km) off Abidjan, Ivory Coast, in international waters.
“Last activity of vessel was drifting in area for approximately 24 hours,” ARC said.
The company also stated  that eight armed men boarded the tanker, whose position is still unknown.
ARC reported a wave height of 1.2 metres and a gentle breeze in the area.
The 105-metre Chinese-built vessel has protection and indemnity cover with Skuld in Norway and has been owned by SK Shipping since 2012.
Meanwhile, the company was not immediately available for further information, but has been contacted by email.
According to Artificial Intelligence ,(AIS ) data, it shows the vessel left Abidjan on 1 October, bound for the “high sea”.
The Marshall Islands-flag tanker has been out of range since 12 November, according to Marine Traffic.
The ship also suffered the last reported hijacking off West Africa, when pirates boarded off Abidjan in January, again stealing the cargo.
No damage was reported to the ship in that attack.
The incident was the first in the wider West African region for nearly a year.
Share

Previous Own A Small-Scale Fish Pond With These Steps
Next The Book,“African Leaders Tete A Tete’ Launched