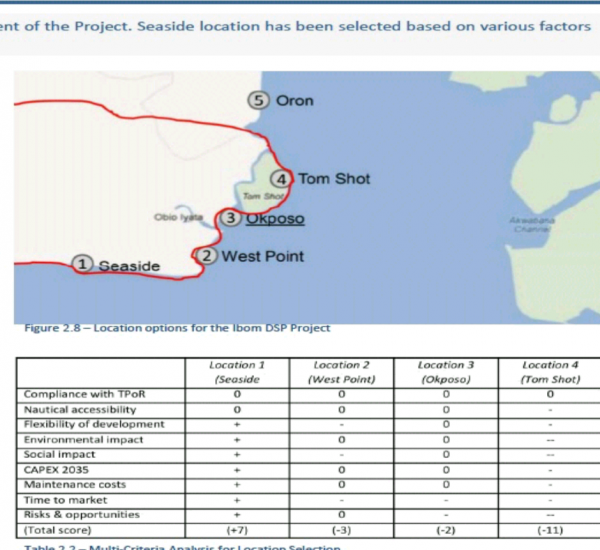 ·  Ibaka was never recommended as site for the project

The controversies surrounding the location of Ibom deep seaport have taken another twist with reports that the Federal Government decided the seaside location following recommendations by the consultants, Maritime & Transport Business Solutions (MTBS) in its Outline Business Case (OBC).

Recall that a former Managing Director of Nigerdock Plc and former Director of Engineering, Nigerian Railway Corporation (NRC), Engr. Nkpubre Okon Nkpubre asserted that the Akwa Ibom State Government influenced the relocation of the port from Ibaka natural harbour for a dugout seaport at Ibeno (Seaside).

Meanwhile, Mfon Usoro in a statement titled, “Facts and Falsities of Engr. Nkpubre Okon Nkpubre’s Claims on Ibom deep seaport project”, said that the project was never located at Ibaka.

While positing that in May 2015, the Federal Executive Council (FEC) approved the OBC and Commencement of Procurement Phase of Ibom deep seaport, she narrated that the Outline Business Case was presented at FEC by the then Minister of Transportation upon recommendation by the Ministerial Project Development Steering Committee (MPDSC).

The MPDSC was chaired by the Ministry of Transportation and comprises several relevant Federal Government agencies including the project proponent, Akwa Ibom State.

Usoro, the immediate-past Secretary General of the Abuja Memorandum of Understanding on Port State Control for West and Central African Region, noted that MPDSC approved the OBC submitted to it by the consultants (Felak/MBTC) that were engaged by the administration of the former governor, Hon. Godswill Akpabio who is credited with having obtained the FEC approval for the OBC in 2015 and the OBC expressly recommended the current seaside location of the port project and the current name of the port to the FEC for approval.

MTBS, a reputable international maritime consultancy company, had subjected the deep seaport’s five proposed locations; Oron, Tom Shot, Okposo, West Point and Seaside, to a rigorous scientific process which recommended the Seaside as the most suitable location for the port.

Oron, Tom Shot, Okposo – Ibaka, West Point are located from the Cross River estuary towards the inland river while the recommended and approved location abuts the sea. The seaside location is referenced by Engr Nkpubre as Ibeno in his recent interview.

Nkpubre, however, claimed that the Federal Government through a Ministerial Committee set up a Project Delivery Team to carry out due diligence studies for the Project.

“The team worked with consultants through a rigorous procedure to select a site near Ibaka Bay and close to Tom Shot Island as the most preferred location for the deep seaport. The due diligence report was submitted in January 2013 and the Outline Business Case was submitted in July 2013.”

“The Government of Akwa Ibom State began to work surreptitiously against the location of the deep seaport at the preferred location in Oron. The SWOT analysis for the Project listed the Natural Harbour at Ibaka as a major strength of the Project,” Nkpubre argued.

Other than the studies by the MBTS and previously by Worley Parsons, findings show that there is no record of studies commissioned by the Akwa Ibom State Government to identify and compare the suitability of possible locations for the deep seaport, let alone one that scored Ibaka as the preferred location.

Usoro also stated that Engr Nkpubre has been corrected several times that the document he keeps referring which was allegedly produced by the Felak/MTBS in 2013 is not the final draft OBC that was submitted to the MPDSC and subsequently presented by the Minister of Transportation to the FEC.

The same consultants a year after in 2014 produced a revised report which reflected the further research advised in the previous version Nkpubre hinges his arguments on. It is that final OBC dated 2014 that recommended the seaside as the best location that was submitted to the Federal Government for approval which OBC was approved in 2015.

Apart from the direct engagements, Engr Nkpubre actively participated at the meeting convened by the Oron Union on 17 April 2021 where all these concerns were comprehensively addressed.

On the cost implications which Nkpubre said would definitely be enormous and comparatively higher than building a deep seaport at a natural habour at Ibaka, the Technical Committee on Ibom Deep Seaport Actualization and Development noted that Engr Nkpubre admitted that he does not have the data to base his conclusions on.

The Technical Committee asserted that the OBC presented the concept design of a dug-out port that was not that of a traditional port alongside a coast, noting that the preferred bidders have their experts in port economics, port finance, port construction and related disciplines that advised prior to submission of their detailed proposals in response to the RfPs issued.

According to Usoro, the commercial risks around cost of construction or the location’s suitability rests on the profit-oriented project partners that are investing capital and who are armed with very sophisticated advisers.

While Nkpubre opined; “If they go ahead, people will be forced to believe that the so called core investor is only a front. People who have stolen humongous amount of money from Government want to use this vain project to launder such funds,” the Technical Committee posits that the preferred bidders are reputable international companies with no Nigerian ownership and invited  Engr Nkpubre to engage forensic experts to conduct due diligence on the companies.

Meanwhile, the Ministry of Transportation, last month, dismissed a petition by a law firm acting on behalf of from Oron Union dated February 2021.

Excerpts of the letter from the Transport Ministry reads: “Accordingly, you are enjoined to advised (Oron Union) to cooperate and support Akwa Ibom State Government in its quest to successfully and timely execute the project for the overall interest of the citizens of the State and the Nigerian economy”

Usoro stated that the Technical Committee concurs with the advice of the Federal Ministry of Transport and commend same to Engr Nkpubre, asserting that all subsequent petitions received that contain similar allegations will suffer similar fate because they aren’t based on facts.