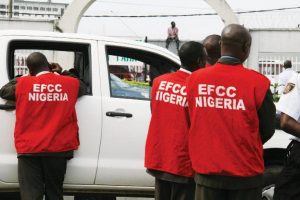 A group known as Save Oji River Initiative has invited the Economic and Financial Crimes Commission (EFCC) to investigate the fiscal activities of the Oji River Local Government Chairman, Mr. Frank Udemezue over alleged financial recklessness.

Save Oji River Initiative highlighted some instances of lootting and misappropriation of funds to include; N6million public donation by Frank where he allegedly ordered the beneficiaries to disclose N3million, N10million to N15million alleged monthly bribes to an ally in the Enugu State Government house, among others.

The group also accused Udemezue of running the local government haphazardly, with monies carried about and disbursed in cash without any financial record to show income and expenditure.

According to the group, it has become concerned that despite the huge allocations that come to Oji River every month, “No age group, association, elders forum or even Oji River professionals could benefit as the Chairman squanders the common wealth,” alledgedly.

“Recently, we saw on the donation list of the reckless Enugu West Political rally at Agwu christened – (Ifemelu-mma) that the chairman of a Local Government like Oji River that fails to fix primary schools in his village donated public money to an empty adventure. Again, our source that laised with the handlers of the rally got a disturbing information on the exact amount Hon. Frank Udemezue donated. From the information gotten from handlers of the said rally, Hon. Frank donated N6,000,000 not N3,000,000 as he warned them to announce only N3,000,000 to avoid public outburst.”

The group in a statement signed by Mr. Kingsley Okah, Convener of the Initiative, urged the indigenes of Oji River to ask Mr. Frank Udemezue to explain how he used the funds budgeted in the 2020 and 2021 fiscal years.

“Some of the information we got in the last two weeks revealed a lot of shady deals taking place under Frank. A fnancial officer in the Local Government told us how Frank settles one government house ally (the person that forced his name to the governor) N10,000,000 to N15,000,000 every month. He pays him based on the size of the allocation that enters.”

“We are equally dismayed to learn that no financial transactions of the council passes through the bank since Frank came on board. He rather carries cash around and throws it around recklessly in the manner Boko Haram throws bombs”

“We are angered to equally learn that Frank boasts that the Governor of Enugu state got his back but we will help Frank to share to both local and international communities how mindless and wicked a leader could be to abandon his core duty and pursue flippancy and innanities. Save Oji River will not hesitate to drag the state government into this whole charade,” the statement read.

Save Oji River Initiative, however, expressed interest in forging stronger ties with reliable communities and experts in the bid to liberate Oji River from such coontracted scandal linked to an ally in the government house, while assuring that EFCC will storm Oji River LG headquarters soon.

All attempts by our correspondents to reach the Oji River Local Government Chairman, Udemezue were futile; as he refused to pick his calls on several occasions.