more
By Kenneth Jukpor
The leadership of the two leading transportation institutes in the country, Chartered Institute of Transport Administration (CIoTA) Nigeria and the Chartered Institute of Logistics and Transport (CILT) Nigeria have opened talks to address Nigeria’s transport sector woes.
Presidents of both institutes; Dr. Bashir Jamoh of CIoTA and Barr. (Mrs.) Mfon Usoro meet recently and shared thoughts on how to transform the logistics and transport industry in Nigeria.
Although both leaders agreed to collaborate towards the common goal of enshrining professionalism in the sector, details of the collaboration are yet to be disclosed. 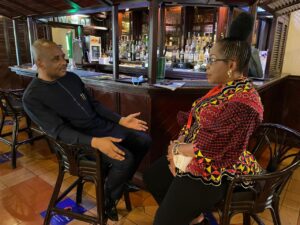 Recall that in June 2021, the President of CIoTA Nigeria, Dr. Bashir Jamoh in June revealed that both institutes are willing to partner but the idea seemed to only augur well with the Presidents at the time as the Governing Councils and executives of both institutes were unconvinced by the initiative.
Speaking on the possibility of a merger in June, the CIoTA President noted that CIoTA boasts more professors and academicians in its membership, while CILT had more operators and workers from various transport parastatals.
According to him, CIoTA wouldn’t be buoyed by the fact that it has gotten the Charter which represents legal backing to professionalize the industry, but the group is willing to unite with an important and strategic partner in CILT.
His words: “Today, CIOTA is the institute that has the Charter as recognised by the Nigerian law, but as I speak with you, we are having talks between CIOTA and CILT to merge so that we can have a formidable force”
“We look at ourselves to evaluate our strengths, in CIOTA we discovered we have so many professors and academicians, while CILT has quality memberships, so if they should bring their quality memberships and we bring our academicians, we would be able to move together”
Dr. Jamoh, who is also the Director General of Nigerian Maritime Administration and Safety Agency (NIMASA), had gotten the CIOTA charter finalised within his maiden four months as the CIoTA President in 2019.
Usoro, who is also a former Director General of NIMASA, recently emerged President of CILT and has pledged to take the Institute to new heights.
more
Share