Mr. Yomi Olomo’s sad experience as a journalist who was almost beaten to death at the Seme Command of the Nigeria Customs Service (NSC) for inquiring into smuggling activities, makes one begin to wonder if such officers aren’t worse than mere street touts.

Recalling the sad experience, Mr. Yomi said, “I was pounced upon by some ferocious men led by Momoh, Shehu and Elijah who are notorious for their border activities; and I heard them say “You will die here today, so that journalists will learn to leave Seme border alone, we will kill you and nothing will happen. I was beaten to stupor and one of my eyes was almost blind with blood, I was then dumped in a pit and from the pit, I heard Ndalati telling the others that they had beaten me enough, adding that it will now serve as a warning to other journalists.”

How can officers which ought to epitomize humility and intellectual sagacity hope send a warning to newsmen by beating up a journalist? When did assault via jungle justice become an applicable method for resolving issues in the para-military?

See them wasting their energy on Yomi while smugglers are probably crossing to and fro with contraband items? Where dem pick these set of officers from? 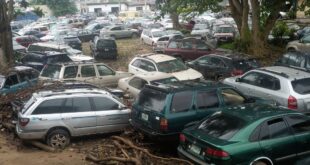