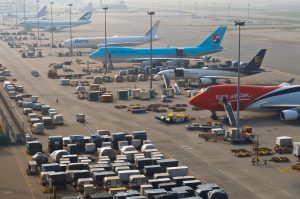 The Federal Government’s decision to suspend Form M and Pre-Arrival Assessment Report (PAAR) for cargo evacuation at the airports is a relief to freight forwarding practitioners that has also led to crisis in the leadership of the Association of Nigeria Licensed Customs Agents (ANLCA).

Four members of ANLCA, including the former executives at Murtala Mohammed International Airport (MMIA) Chapter, have been booted out of the association as a result of the recent development at the airport.

Meanwhile, the Africa Association of Professional Freight Forwarders and Logistics of Nigeria (APFFLON) has commended the Presidency for the decision to revert to Code 4900 and suspend Form M and PAAR.

Recall that the freight forwarding group wrote a letter to the Vice President, Prof. Yemi Osinbajo where the practitioners stressed that such development would lead to undue delays in the cargo evacuation process at the airports, citing the Nigerian seaports as an example.

The letter signed by the National President of APFFLON, Mr. Frank Ogunojemite, titled “The Need To Stop The Planned Introduction Of F ‘FORM M’ And PAAR On Air Freight” and dated 10th June, 2020.

The turnaround by the government elicited wide commendations for the government as well as the freight forwarding group as practitioners from other associations also applauded APFFLON for the initiative to reach out to the presidency on the issue.

However, a frightening twist development was witnessed yesterday as four members of the ANLCA were ousted following their overt commendation of APFFLON leadership.

Speaking with MMS Plus on this development, the President of APFFLON, Ogunojemite described the change by the Federal Government as an epitome of good governance and a leadership that is focused on the welfare and well-being of citizens.

He also thanked the freight forwarding practitioners who commended APFFLON efforts especially those under other associations, noting that their actions show true sportsmanship.

The APFFLON boss expressed regrets that the ANLCA leadership would victimize practitioners for expressing satisfaction and commending an intervention that would ensure ease of their business operations and prevent loss of funds via demmurages.

He stressed that the various practitioners at the airports should be able to find common ground and shelve their differences when confronted with challenges that threatened their operations as practitioners.

His words: “What we have achieved with this development is success for all freight forwarders in the aviation sector. Our consignments are timely, light and essential, APFFLON implored the Vice President to kindly use his office to persuade the Ministry of Finance and the Customs Service to jettison plans to introduce the fiscal policy that would be detrimental to Nigerians.”

“The government withdrew the Form M and PAAR last week and reverted to the Code 4900 procedure.This is victory for all practitioners at the airports that would have suffered more storage charges from delays from Form M. Unfortunately, those who celebrated and congratulated APFFLON have been booted out of ANLCA. I don’t see why we should always have the need this unnecessary bias and rivalry, when the issue at stake threatens the operation of everyone irrespective of your association”