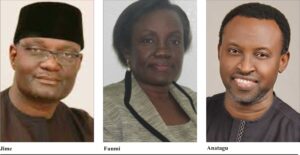 The Executive Secretary, NSC, Hon. Emmanuel Jime, on Thursday last week, listed key issues to be addressed to make Nigeria a maritime hub in the region as the nation tries to open up business opportunities in AfCFTA expected to boost intra-African trade by 52.3% once import duties and non-tariff barriers are eliminated.

Jime, who was represented by Chief Cajetan Agu, Director Consumer Affair of the council, noted the Logistics Performance Index (LPI) as one of the key indicators Nigeria has to address to enable the country to benefit adequately from AfCFTA.

“On the LPI rating, the first is South Africa, followed by Egypt and Kenya; Nigeria is number 14, globally we are 110. The second indicator is the dwell time of cargo at our ports; this measures the clearance time of cargo at port. The port in Durban, South Africa and Lome port is 4-days, Apapa port is hovering over 20 to 22 days.”

“Another issue is connectivity rating, our closeness to the global market. South Africa is first, globally 52; Egypt second and globally 58; Nigeria is 8 and globally 75,” he said.

Jime pointed out that from the above; Nigeria had more work to do in order to position itself as the maritime hub for AfCFTA.

He added that in the Nigerian port sector, road, rails, inland infrastructure, coupled with the perennial and embarrassing gridlock on our port access roads, may not cope with the anticipated increase in economic activities occasioned by AfCFTA, adding that there is a dire need to provide scanners at the ports, fast track the development of deep seaports and improve the agricultural value chain.

The NSC boss argued that if these indicators were implemented, they would spur economic growth and prosperity and eradicate poverty on the African continent, while Nigeria could improve competitiveness by exploiting opportunities which would lead to more shipping activities for the nation.

Also speaking at the event, a Director at the Council for the Regulation of Freight Forwarding in Nigeria (CRFFN), Dr. Alban Igwe harped on the need for Nigeria to have an efficient multimodal transport system.

According to him, the fact that Nigeria has not signed the convention on carriage of goods that will help improve all the services across all modes could be a limitation with the continental trade agreement.

“There is a need to address the Logistics Performance Index of the country, create timeline and task lines to enable us achieve things at the right time and know which agency is responsible,” he said.

Meanwhile, the National Coordinator, Action Committee on AfCFTA, Mr. Francis Anatogu, posited that Nigeria focuses on some goals to help reap the benefits of the regional trade, such as; to grow productive workforce, engender friendly business environment, grow local demand, among others.

On his part, the representative of Lagos Chamber of Commerce and Industry (LCCI) Freight Forwarding Group, lamented that freight cost from Nigeria to Ghana has become more costly than China to Nigeria.

Manufacturers Association of Nigeria (MAN), however, identified the challenges with power supply and high costs of electricity, long dwell time of cargoes at the ports, extortion and long bureaucratic processes and poor road infrastructure as burning issues to be addressed at the ports.

The MAN representative stressed that these issues were the arguments that the group put forward at the presidency which saw the nation delay in signing the AfCFTA agreement.

“MAN delayed Nigeria’s participation in AfCFTA because of these lapses which place the country in a disadvantaged position. We eventually agreed with the Presidency that the issues would be addressed speedily to enhance the nation’s position but the issues remain,” he said.

He also called for prioritizing automation of port processes in the scheme of things if the country wanted trade facilitation to grow.

“We need to move from lip service to actual steps that will move us forward,” Akabogu said.

While giving the concluding remarks at the summit, Chief Agu noted that the current practice of Nigeria Customs Service (NCS) with goods legitimately released by its officers at seaports is intercepted on the port access roads or highways are against global trade standards.

“Customs examination officers release goods at the seaports but other officers intercept them just by the port corridor at Leventis in Apapa. This is a disservice to trade and it is against World Trade Organization (WTO) standards. Along the border routes, the situation is the same as you find Customs and other security agencies having over 50 checkpoints along the border road but you cross over the neighbouring country and you won’t find such checkpoints. When we make trade easier, more trade will occur. All agencies should collaborate to make things work,” he said.

On her part, the Co-champion on Transportation for AfCFTA, Ms Funmi Folorunsho noted that a lot had been done and more was still required m, but called for more private sector participation for AfCFTA to work.

“We require a resolution from this meeting establishing an industry AfCFTA group/body composed of service providers, container depots, ship owners, ship financiers, managers, crew, marine engineers, seafarers’ associations, chambers and shippers. Each group will nominate one focal person who will be the point of contact with the secretariat,” she said.

AfCFTA is the largest regional area in the world by the number of countries participating, connecting about 1.3 billion people and also has the potential to lift 30 million people out of extreme poverty.

The agreement requires members to remove tariffs from 90% of goods, allowing free access to commodities, goods, and services across the continent. The United Nations Economic Commission for Africa estimates that the agreement will boost intra-African trade by 52 percent by 2022.

How soon will Nigerian railways, roads, waterways and aviation sector be ready for AfCFTA? Can the nation’s power supply and the cost give Nigerians an advantage? What’s the place of standards, how prepared are the regulators in this regard? How much of AfCFTA trade is Nigeria willing and ready to control? These are crucial questions begging for answers as Nigeria continues AfCFTA preparation.

Previous Why petrol smuggling continues, by Kyari
Next Anyika’s Birthday Tips: How To Be An Inspiring Woman