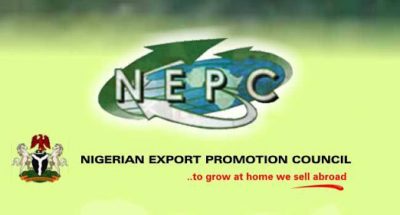 In spite of challenges faced by farmers and exporters, Nigeria exported products worth N1.77 trillion between January and June 2022 to different parts of the world, according to the Nigerian Export Promotion Council.

Executive Director of the NEPC, Dr. Ezra Yakusak, stated this in Abuja at a recent press briefing to announce the half-year performance report of the agency as well as the non-oil sector.

Yakusak said the country recorded a significant growth in non-oil exports as a total of 4.146 billion metric tonnes of products worth $2.593 billion were exported between January and June 2022.

He said the figures were obtained from the non-oil export performance reports of various shipment inspection agents who were appointed by the Federal Government to determine volumes, values and destinations of Nigeria’s non-oil exports.

The Executive Director noted that urea, fertilizer and cocoa beans were one of top products exported.

“Of the top 15 exported product in the first half of the year of 2022, urea/fertilizer recorded 32.49% of the total export while cocoa beans, sesame dead and Aluminium ingots contributed 12.65%, 7% and 5.07% respectively within the same period.”