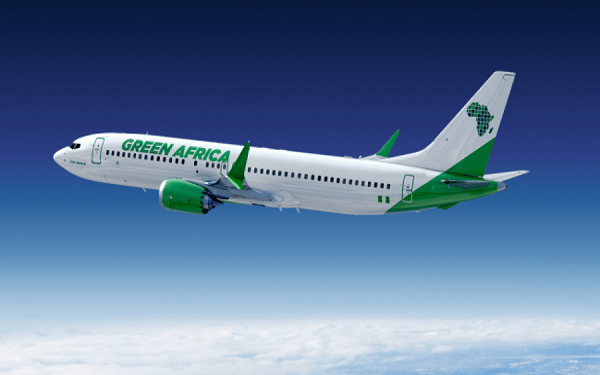 Green Africa Airways, a new entrant in the Nigerian aviation sector is set to launch commercial operations in efforts to spur regional economic development with low cost air fare.
Its flight operations are scheduled to kick off on June 24, 2021 with starting price for booking as low as N16, 500 ($40) and a 10% discount on first booking for members of the Flyer Community.
Operational domestic destinations are also targeted at busy routes such as Lagos, Abuja, Port Harcourt, Akure, Ilorin, Enugu and Owerri. Green Africa also announced delivery of three ATR 72-600 aircraft by ACIA Aero Leasing, which are generally cheaper to maintain aircrafts (propellers) that use less fuel with a capacity of about 78 passenger depending on arrangement.
Findings revealed that Green Africa Airways has adopted to run a minimal administrative office to cut costs with a small number of staff couple with a flexible aircraft that can save yearly operating cost up to $1million as against counterparts that make use of larger aircraft for short flights and glamorous offices for daily operations.
Industry observers and stakeholders, however, posit that the cheap fares may cause disruption in nation’s airline business at the heat of COVID-19 pandemic which has made existing airline operators raise fares of domestic flights by over 100%.
There are also concerns about the sustainability of the business approach to be adopted by the new airline, even as some analysts draw an analogy to Sir Richard Branson’s British Airways model.
Recall that in July 2020, when the authorities lifted the flight ban on domestic operations the cost of air tickets skyrocketed due to many factors which include; foreign exchange and COVID-19 protocols that reduced the number of passengers on each flight.
As of December 2020, some Nigerian airline operators were considering mergers as COVID-19-induced strains grounded aviation activities, pushing them near bankruptcy. The Director General of the Nigerian Civil Aviation Authority (NCAA), Capt. Musa Nuhu said then that merger was the only option the aviation industry had left, as government bailout intervention was not forthcoming.
Over the years, existing airline operators in the Nigerian air space have witnessed several operational challenges, precipitated by what most of them describe as an unfriendly business environment which has led to a great number of airlines to either fold up or taken over by the Asset Management Corporation of Nigeria (AMCON).
Other challenges includes scarcity of forex as airlines have continued to source foreign exchange from the parallel market at N500 per dollar, high maintenance cost as airlines have to fly to Europe for servicing.
Findings revealed that it cost airlines between $500,000 and $1million to carry out mandatory C-checks on their aircraft every 18 months.
Lack of commercial aircraft Maintenance, Repair & Overhaul (MRO) in the country, scarcity of forex couple with coronavirus pandemic meant that some aircraft that were taken out of the country for C-checks yet to be brought back.
In addition, operators still need to pay for landing and parking fees, ground handling fees, en-route air navigation services, catering, among others.
With growing amount of insecurity in the country such as banditry, terrorism and kidnapping for ransom, it is expected there’s going to be a paradigm shift with Nigerians to make use of Green Africa Airways to travel as its relatively affordable.
Can Green Africa be a breathe of fresh air in the nation’s aviation sector or will be another failed attempt in air travel business? We will have to wait to find out!
Share