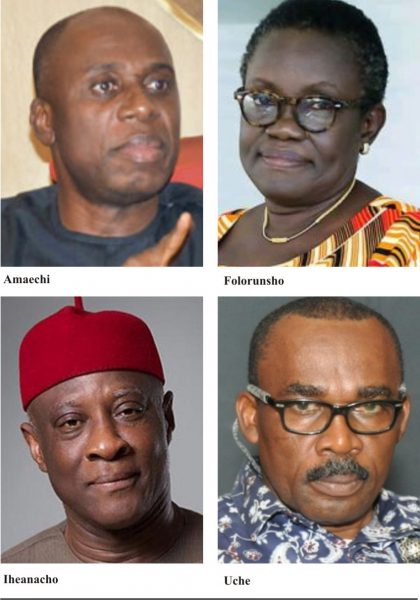 As the implementation of the African Continental Free Trade Agreement (AfCFTA) is set to take off in January 2021, several Chief Executives of government agencies in Nigeria’s transportation sector have sold an ambience of optimism that the country would be ready in less than three weeks.

The reality, however, is that the nation has an uphill task to be ready for this regional free trade area even by the end of the first quarter in 2021.

Nigerian seaports remain characterized by congestion on the access roads and consequently the seaside with tens of ships waiting beyond the normal time. There is a huge deficit of infrastructure for roads, railway and power supply.

The nation can’t boast of a deep seaport at the moment, while the closest to completion, Lekki deep seaport is a logistics disaster waiting to happen as the project is devoid of railway connection and suitable roads.

Although the nation’s land borders have been closed for over 16 months, the impediments at Nigerian ports which drove importers to patronize neighboring ports to eventually opt for trucking haven’t been addressed.

In shipping, indigenous ship owners haven’t been guaranteed contracts on crude affreightment and they are without funds to compete with their contemporaries in other countries.

The disbursement of the Cabotage Vessel Finance Fund (CVFF) has become associated with “soon” to the extent that Christian faithfuls have likened it to waiting for the second coming of Jesus Christ. While Christians can take solace in the fact that the bible showed some signs to look out for in anticipating the return of Jesus, Nigerian ship owners haven’t had such luxury with CVFF.

Neither the Nigerian National Petroleum Corporation (NNPC) nor the Nigerian Maritime Administration and Safety Agency (NIMASA) have put forward a plan for the country with regards shipping development under AfCFTA.

Nigerian Ports Authority (NPA), Nigeria Customs Service (NCS), Nigerian Shippers’ Council (NSC) and other port stakeholders are still puzzled with managing the port environment to dissipate, if not eliminate, port congestion, multiplicity of charges, unpredictable logistics fares such as trucking, barging, among others.

Projections for electronic truck call-up systems for the ports access roads, establishment of a Single Window platform to expedite cargo evacuation and simplify transactions, among other innovative concepts, have remained beautiful forecasts.

The pipeline mode of evacuating liquid products from the ports is almost non-existent as vandalism has grossly affected this mode of transportation. The result has been more tankers on the already overburdened port access roads.

Nigeria, with a population of over 200 million, can become a supplier of transport professionals, especially in the area of seafaring which is a major revenue generating profession.

In the aviation sector, there is a need for more focus on development of airport infrastructure in the African continent, in view of the impending trade development with the AfCFTA.

The Director of Government, Legal and Industry Affairs, African Airlines Association (AFRAA), Aaron Munetsi also advocated this at the 2019 Aviation Day of the 16th AKWAABA Travel Market while speaking on the topic “Impact of Airport Development & Airlines on Tourism Growth”.

Meanwhile, airlines have been the biggest economic losers since the outbreak of the COVID-19 pandemic and Nigerian airlines with little or no form of palliatives to sustain their operations, let alone compete in the region.

In a bid to address some of the shortcomings in infrastructure and policies, the National Action Committee on AfCFTA for Transportation, led by the Co-Champion, Mrs. Funmi Folorunsho paid a visit to the headquarters of Nigerian Shippers Council (NSC), recently.

At the meeting, Folorunsho preached optimism and projected that the country’s transport system could be ready for AfCFTA take off in January.

Given the myriad of challenges facing the nation’s transport sector, the call for optimism especially from the media has become worrisome. Could optimism address the real challenges at ports or infrastructure deficits across various modes of transport? Would optimism correct the attitudinal flaws leading to bureaucracies and hostile business environments in the nation?

While receiving the AfCFTA implementation team, the Executive Secretary of NSC, Mr. Hassan Bello stressed that there were lots of issues to be fixed in the sector to enable the transportation place Nigeria in an advantageous position.

Bello identified some of these crucial factors as road infrastructure, railway connectivity to inland dry ports and hinterlands, speedy cargo evacuation, automation, Single Window platform at ports, availability of fleet for ships and aircrafts, among others.

He, however, expressed optimism that Nigeria could be ready for the AfCFTA take off in January 2021, adding that the port system would be fully automated in the first quarter of 2021.

“This AfCFTA is coming up effectively in January 2021 and we have to inspect the nation’s infrastructure and policies. This agreement is good but it will only favour those who are ready and those who continue to improve their infrastructure. If I look at the state of our readiness as a nation, I know that we have a lot of work to do.”

“We have a deficit on transport infrastructure. We have the issue of roads, rail and connectivity to hinterlands. Although we have a population of over 200million, an enormous market and vast coastlines, these factors have to come together in a deliberate manner to facilitate trade under AfCFTA,” Bello said.

Bello also noted that the nation would soon record a boom in ship acquisition as the National Fleet Implementation Committee has made headway in addressing most of the factors limiting ship acquisition.

He called for a new port order where Customs examination would take place outside the ports to facilitate speedy cargo evacuation from ports.

Speaking on Nigeria’s readiness for AfCFTA last week, the Chairman, Integrated Oil and Gas Limited, Capt. Emmanuel Iheanacho said; “If Nigeria wants to be a hub, there must be hospitable ports and viable shipping lines. To be a hub means that the nation wouldn’t only provide services for itself, but also for landlocked countries.”

Iheanacho who was speaking on Maritime Reality Check queried; “Would someone from Chad or Niger be interested in the ordeals of traffic congestion to use Nigerian ports? Would they be glad to have people extort them on the port access roads and other locations on the highways?”

Sharing his thoughts from the standpoint of a freight forwarder, the President of the National Association of Government Approved Freight Forwarders (NAGAFF), Chief Increase Uche lamented that the ports aren’t ready for AfCFTA.

His words: “Nigerian ports are all river ports. The government has to expedite the development of deep seaports because the nation can’t compete under AfCFTA with river ports barely upto 13meter darft. New shipping methodology requires deep seaports and Nigerian ports can’t be competitive when we consider the economies of scale. This is why the productivity of the ports keep dwindling, while the port cost and congestion increases”

Noting that the nation has reached a situation where local shipping cost has risen astronomically, he said: “After clearance of cargoes, the haulage services which previously cost N100,000 have risen to over N1.5million. That’s over 1500 percent and this could result in abandonment of cargoes at the ports by importers.”

“An institution like the Shippers’ Council is trying and lots of complaints by freight forwarders flood the Council daily. How many can the Council address, even though they are the only succor for freight agents? One must commend the NSC boss for his efforts to reach out to terminals and shipping lines to get them comply; but the problems persist.”

As AfCFTA aims to boost intra-African trade by making Africa a single market of 1.2 billion people, with the goal of increasing intra-African trade to 25 percent by 2023 from the current 15 -18 percent; the need for the optimization of Nigerian ports and its entire transport system has become sacrosanct.

Nigeria accounts for about 17% of Africa, but the nation’s transport cost and service delivery would have to be competitive ahead of AfCFTA. It is unfortunate that despite the port concession, Nigerian ports are still not competitive, rather we have different monopolies.

There would also be a need to develop proper macro-economic policies both fiscal and monetary, streamline the multiple Customs units and frivolous interceptions, reduce the number of agencies at the ports, boost automation, encourage Public-Private Partnerships (PPP) in port operations and management, power supply, and other transport infrastructure.