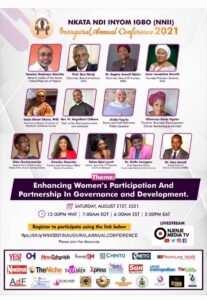 As part of activities to celebrate its first anniversary, NKATA Ndi Inyom Igbo (NNII), a socio-cultural group of women, would organize a conference themed; “Enhancing Women’s Participation and Partnership in Governance and Development.”

According to a statement by the group’s publicity secretary, Nnedinso Ogaziechi, said the event which is scheduled to take place on Saturday, August 21 will be in three sessions over a few hours.

The Senator representing Abia South senatorial district and Minority Leader, Enyinnaya Abaribe, and a few other panelists would be discussing various issues that are dear to the women as equal stakeholders in national development.

National Publicity Secretary, Nnedinso Ogaziechi, in a statement, said the vision of the group is to galvanise women across regional and religious lines to intensify the push for complimentary leadership that can facilitate development, especially after the global economic crisis in a pandemic that has triggered deeper problems in all sectors of national and global life.

“This would be in line with the Motto of the group, ‘Partnering for Development,” she said.

The group is geared towards deepening the impact of women across all sectors of the nation for economic development, peace and stability, using the strategic women’s roles in the family for regional and national upliftment.

“This, to Nkata, would entail a revival of our valued cultures and moral ethos, deeper socio-cultural impact, better economic empowerment and good political inclusiveness that can fully help to maximise the capacity of empowered women,” she said.