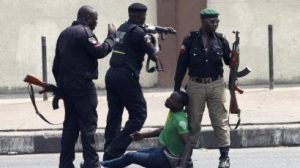 A News Reporter with MMS Plus newspaper, Mr. Yusuf Odejobi was arrested, handcuffed and paraded for over five hours by policemen who had invaded the headquarters of Kings Communications Limited in the early hours, yesterday.

The policemen acted on the directives of Dangote Group Spokesman, Mr. Anthony Chiejina who had threatened to deal with the leadership of the media outfit for publishing a news story titled, “AMCON May Take Over Dangote Refinery As Liabilities Swell“.

Odejobi was handcuffed and bundled into the police vehicle: A Blue Ford Ranger’. While in the vehicle heading to the police station, the police officers threatened to use him as a litmus test or scapegoat. He was later taken to the Zonal CID, Zone 2 Command, Onikan where he said the Police paraded him like a criminal taking him from one office to another in handcuffs from 12noon to about 5:30pm.

According to Odejobi, there were four officers; two from Nigeria Police Force Criminal Investigation Department (FCID), a legal officer and a man who claimed to work with Dangote Group.

“They asked for my personal details such as house address, family’s contacts, work history, among others. They reminded me that they could also come to my house if they didn’t meet anyone at the office any time they come again”

“I was told to write a statement and they handed me a Letter of Invitation for the Publisher of MMS Plus newspaper. When they came in the morning they had said they wanted to submit this letter of invitation for the CEO and I wondered why they couldn’t just drop the letter and leave. While insisting on seeing the CEO, they got angry when news stories started coming out that they raided our office. They, however, allowed me to go at about 5:30pm based on “Self Righteousness” after collecting N500 which was said to be for capturing,” Odejobi stated.

Recall that the siege by the police is a follow-up to Chiejina’s threat to deal with the editorial leadership of the news outfit via legal action. This was after several failed attempts by Chiejina to get the Editor pull down the story, the Dangote spokesman instead of issuing a rejoinder or take legal action which he had threatened against our media house, resorted to bullying and intimidation by ordering policemen to beseige the office of MMS Plus, an act that is against information dissemination in a democratic society and a threat to the survival of the media, the fourth estate of the realm.

It should also be on record that if the elites succeed in gagging the press, we have no one to put anyone under check and society will be more brutish. Also, recall that Chiejina had searched for the photos of the news editor, Jukpor and Publisher, Anaroke on Sunday and sent them to the editor as a subtle threat, this again portends serious danger for news men in this digital age.

This statement was signed by the Editor of MMS Plus newspaper, Mr. Kenneth Jukpor.