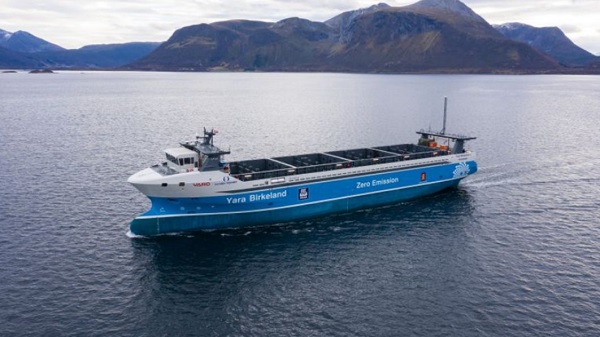 The vessel is planned to ship products from Yara’s Porsgrunn production plant to Brevik and Larvik in Norway, helping move transport from road to sea and thereby reducing noise and dust, NOx and Co2 emissions.

Upon delivery, the vessel is scheduled to undergo testing for container loading and stability, before it sets sail to a port and test area in Horten for further preparations for autonomous operation.

“We were tasked with building a vessel prepared for an autonomous operation which Yara will further develop until launch. The hull was built by Vard Braila and initially, the plans for outfitting and delivery was for Vard Brevik, later transferred to Vard Brattvaag,” Vard said.

“We have been through an existing process with technological development and have gained a great amount of knowledge about such types of vessels, which we will continue, drawing experiences from going forward. This is an example of how flexible we need to be in order to adapt to new technology and changes in the maritime industry,” it added.

The latest update comes on the back of the project being halted back in May 2020 due to the impact of COVID-19.

The hull of the Yara Birkeland vessel was launched to sea at Vard Braila in Romania in February 2020 and was expected to arrive at Vard Brevik in Norway in May where she was scheduled to be fitted with various control- and navigation systems and undergo testing before delivery to Yara.

Earlier this month, Yara said that the construction of the ship has been done according to plan with slight delays, including the fitting of the battery, control and navigation systems. Nevertheless, the autonomous logistics on land have proven to be a challenge for the project.

“For the autonomous logistics on land, the project team continues to look for simplified solutions to this,” the company said.

“Yara’s goal is to complete the project and bring the emission-free ship into commercial operation. Different ownership models or partnerships will be evaluated for operation and commercialization.”

The ship was announced by Yara and technology company Kongsberg back in 2017 as the world’s first fully-electric container feeder, which will produce zero emissions.