Why Nigeria Is Home To Abandoned, Unserviceable Airplanes 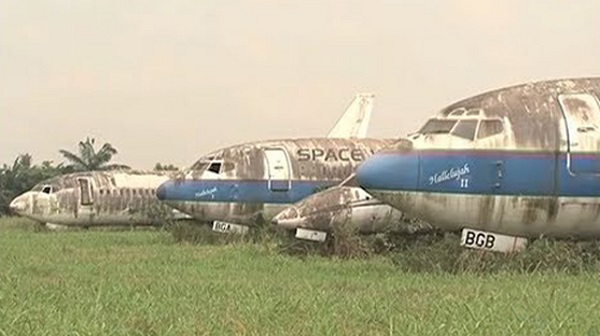 Nigeria has taken the unenviable top spot in the ranking of countries with the highest rate of abandoned and unserviceable aircraft among 10 countries polled for the exercise by a Swiss-based firm, CH Aviation.

While the poll and subsequent damning report has reemphasized the myriad of challenges in Nigeria’s air travel sector, experts have identified numerous factors including; tough fiscal environment, lack of Maintenance Repair and Overhaul (MRO) facilities, shabby business models, among others leading to the highest number of old planes in the country.

Despite having a smaller aviation industry, Nigeria ranks higher than Germany, United Kingdom, Argentina, and Malaysia among the top countries with the highest number of geriatric planes.

According to the 2021 CHAviation report, Nigeria topped the list of countries with the most unserviceable aircraft with a score of 69.2 percent beating Germany with 51.2 per cent to the second place in the survey.

Founded in 1998 in Chur in Switzerland, CHAviation has become an influential airline intelligence provider and one of the very few Swiss aviation success stories. It has more than 1.8million users each year and counts hundreds of companies in the airline industry as its customers.

Experts who have spoken on why Nigeria is in this situation identified factors, however, this reality epitomizes the state of affairs in a country that is endowed with human and material resources but bedeviled by poor leadership and inept institutional frameworks to address routine matters, including regular maintenance of assets.

Speaking with MMS Plus on this, Engr. Ronald Opeyemi Ajiboye, an Aerospace Engineer and the CEO/Founder of McRonald AutoDrone Centre Ltd, one of the leading and foremost indigenous Aerospace & Automotive Company in Nigeria, lamented that Nigerian investors have erroneous perception of aviation business.

Ajiboye also decried the hostile business environment for aviation in the country, noting that most airliners have acquired planes already over two decades old.

His words: “Sosoliso, Belview, Aero Contractors and several other airlines have evacuated, but we should ask why airlines don’t stand a test of time in Nigeria. Is it the policies that they don’t get right, is it the business model of the airlines that have been faulty?”

“Check the profit generated on each passenger that takes a flight and you would find that the average profit is around $6. So, it means that the profitability of airline operations have been overrated. If you want a business you can generate a huge chunk of money with fast Return On Investment (ROI), it might not exactly be airlines, you might want to consider other profitable businesses. But Nigerian investors venture into airline business with the wrong perspective and mindset.”

He lamented that people aircrafts to show off, without considering the lifespan, profitability and salvage value of the investment.

“Almost every aviation operation is shutting down in Nigeria, Exxon Mobil MRO has been existing for more than 40 years but they had to shut last year. ExxonMobil was one of the biggest facilities in Nigeria. In terms of remuneration, they pay well because they can afford it, but they’ve shut down already. They sold their assets and totally outsourced their operations, leading to job losses. Would we say an organization like Exxon Mobil didn’t operate a good model? No. I think the problem is that Nigeria is not a good environment in terms of policies and regulatory compliance for airlines operation,” he added.

According to him, the CHAviation report isn’t from the truth because Nigerians mostly buy used aircrafts with over 20 years in operations, adding that absence of MRO and tough fiscal environment quickly lead to the demise of the airplanes.

Meanwhile, the Chief Executive Officer of Top Brass Aviation Limited and former Director-General of the Nigerian Airspace Management Agency (NAMA), Mr. Roland Iyayi argued that hostile policies have been responsible for the dearth of airlines in the country.

Iyayi also noted the availability of incentives to airline operators abroad while such incentives aren’t available in Nigeria.

Giving an illustration from the post Covid-19 interventions by governments, he said, “In the US today every airline in America is owned by private entities, not government. Nevertheless, the government was glad to give airlines over $6billion as first batch of palliatives. After some airlines threatened to layoff staff because the loads they are getting became less than what they had in the pre-COVID era, the American government started working out a second round of palliatives for the airlines.”

“The Singaporean government also supported airlines with $6.9billion. This was done so that Singapore can meet up the obligations for all the aircraft on its fleet. Singapore is just an Island without major airports like we have in Nigeria. The point is that they recognized that the aviation sector is crucial to sustaining a major economy.”

The aviation expert noted that he had an aircrafts that haven’t flown since the COVID-19 outbreak, but he couldn’t access the intervention fund provided by the federal government via the Central Bank of Nigeria (CBN).

According to him, the aviation sector roadmap being implemented by the President Muhammadu Buhari-led government would enable airliners acquire new aircrafts and provide an MRO to maintain airplanes.

“There is a roadmap that should serve as a catalyst for a comprehensive overhaul of the aviation industry in Nigeria. It can position the country as an air transportation hub within the West and Central African sub-region.”

Aviation experts, however, posit that the sector needs to be treated with a greater amount of seriousness than it currently gets.

The sector is capital intensive and denominated in foreign currencies; it is also a hi-tech and high precision industry where mistakes and neglect in its operation quickly leads to mishaps that have the tendency to claim many lives in one fell swoop.

Beyond the harsh business environment and poor business models, the regulatory agencies and the government must also up their games in surveillance and enforcement of extant rules and regulations.