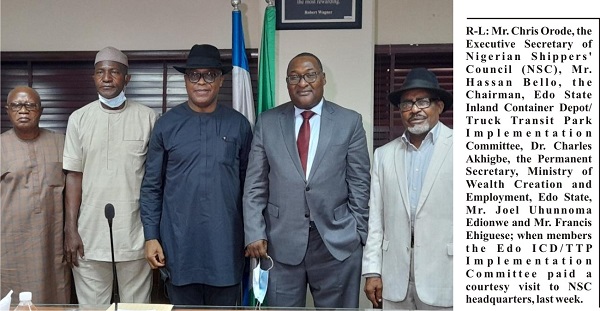 Several years after the Federal Government approved seven dry port projects across the nation, only the Inland Container Nigeria Limited (ICNL), Kaduna is functional but the government has outlined factors delaying the approvals for port of origin and port of destination.

While there have been postulations of alleged politicking with the approvals,  the Executive Secretary of Nigerian Shippers’ Council (NSC), Mr. Hassan Bello highlighted connectivity to crucial transport infrastructure such as roads, railways and seaport terminals, as the top factor in approvals for dry ports.

Bello, who was speaking during an exclusive chat with MMS Plus last week, also stressed the government wouldn’t designate truck parks or markets as dry ports just for political reasons.

According to him, “there must be modern infrastructure and processes. There should be refrigerated warehouses, processing centers, connection to other crucial infrastructure such as rail, roads, etc. The dry port must reflect the economic ambition of Nigeria.”

“The dry port is more feasible when it’s linked to the rail. It has a lot of advantage compared to utilization of trucks alone to transport cargoes. There would be more volume of cargo on the trains; it’s faster, cheaper and more regular than the trucks. Trucking to Kaduna will take 3 days but with the train it takes less than two days and it is cheaper.”

Bello noted that he had considered stressing that no dry port will get port of origin and destination status without rail connection but rescinded because the rail plan could be arranged while dry ports take off with roads.

He stressed that emerging dry ports must have an ambition to complement its activities with industrial and other trade developmental facilities.

“We want dry ports to be filled up with companies that will complement each other. We would like industries to be sited there, banks, artillery services, factories, packaging and processing companies to package for export products, refrigerators for warehouses to serve cargoes that are temperature sensitive and the likes. In Kaduna presently, there is a semblance of this. The banks and industries are coming in and that is what we want for all the dry ports,” he said.

Noting that NSC has gotten the interest of African Export-Import Bank (Afreximbank) about critical infrastructure that could grow the economy and dry ports are top priority, he said, “We want dry ports to be the centre for exports, like the free trade zones. We should have a standard for export at the dry ports. With Afreximbank, we’re trying to see that all dry ports are equipped to provide standardization, certification and other logistics that could be of advantage and they’re really enthusiastic about it.”

Recall that the initial seven approved dry ports are: IsialaNgwa in Aba, Erunmu in Ibadan, Heipang in Jos, Zawachiki in Kano, Zamfarawa in Funtua, Jauri in Maiduguri and ICNL in Kaduna.

Bello expressed optimism with the dry ports projects in the country, stating that “the dry ports are all coming up this year with Kano and Ibadan. Kano has started construction and by the end of this month it’ll be operational and also with the Maradi line, Kano serves as a gateway to Niger, Chad and other countries. Ibadan serves as a distribution centre to decongest Lagos port. Within a short period of time, construction will begin there too.”

While commending the barging alternative for cargo evacuation from the Lagos ports, Bello noted that the charges are expensive even as he revealed that the Council has developed a tariff framework for barge operations.

“We’re not going to allow the barging cost to spiral. We’re working on it here to control the tariff. We still had a meeting last week where Shippers’ Council brought out the tariff structuring for all port facility users and service providers including barge operators,” the NSC boss said.

Meanwhile, the President of Barge Operators Association of Nigeria (BOAN) Mr. Edeme Kelikume argued that the prices for barging are driven by market forces.

As part of efforts to reduce the cost of barge operations while ensuring standards, National Inland Waterways Authority (NIWA) has entered partnership with an indigenous firm for the building of standard barges.

The Area Manager of NIWA Lagos Area Office, Mrs. Sarat Braimah disclosed this during a chat with our correspondent, last week.

Her words: “The Managing Director of NIWA recently visited a company in Lagos, known as Samsung Heavy Duties. The company specializes in building barges and other vessels, so NIWA is collaborating with them to build barges in Nigeria. These barges will also be manned by Nigerians and we expected to have kicked off this development but the COVID-19 travel restrictions that kept most of the company’s expatriates abroad. Things are getting back to normal and these expatriates are coming back. We expect this development to kick-off in less than three months”

Speaking on the delays with the substitution of container deposits with insurance at the nation’s ports, the NSC boss said that the port stakeholders’ support is still being solicited while legislation will also be required for the issue.

“It’s a stakeholder thing; we can’t decree that insurance should replace container deposit.  We need to get the buy in of the shipping lines because they’re the owners of the containers. The billions of naira trapped as container deposit is inappropriate and Shippers’ Council cannot allow it any longer.”

“How can the risk be shared? Isn’t this an insurable activity? Why not bring insurance rather than make importers pay up N200,000 for container deposits and hardly get it back. Shippers can pay insurance company N20, 000 and the insurance company figures out how to take the liability from shippers.”

“The shipping companies have already keyed into this. They’re enthusiastic but also concerned about the risk. They want this to work out well, but more importantly the Commissioner for Insurance and Chief Executive Officer of the National Insurance Commission (NAICOM), has been wonderful and very supportive. The committee is working, although there is still some legislation to be made but immediately that is sorted we’ll push forward. Shippers have been more critical because they are the ones that use the containers. Freight forwarders and the likes will also be involved in the process,” Bello said.

His words: “Shipping companies are fraudulent; they’re the ones destroying Nigeria’s port system. They are making money under the disguise of container deposits and demurrage, extorting importers whereas they are the ones that are supposed to provide holding bays. They have been importing and dumping containers in Lagos for over ten years or more and not returning it. It is high time Shippers Council step in to address this.”

“There have been talks about scrapping the payment of container deposit and replacing it with insurance. This is the best time for NSC to complete that arrangement. If the shipping companies are really honest, this is also the best time to collaborate with the regulators and make sacrifices to take back their empty containers. If possible, the regulators could structure waivers to support them while they bring in sweeper vessels to move these empty containers out of Nigeria.”