Why Emefiele Opted For Naira Redesign 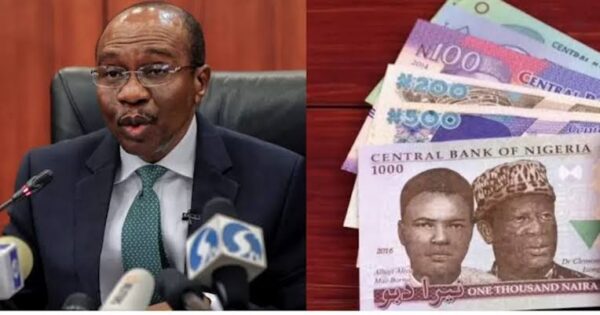 The new policy on redesign of Naira notes by the Central Bank of Nigeria(CBN) has polarized the Federal Executive Council(FEC) members of President Mohammed Buhari, even as many Nigerians, including investment and financial experts are still trying to appreciate the full essence of the policy said to have no bearing on the existing monetary policy and economic realities.

Described as suspect by many policy analysts, the secrecy with which it was handled leaves the suspicion that there may have been an ulterior motive by a cabal in the presidency to hash an untoward plan to achieve a selfish end yet unknown.

What has lent credence to this postulation by some policy analysts is the public disapproval of the planned redesign of the Naira notes by the Minister of Finance, Budget and National Planning, Mrs Zainab Ahmed, who warned that it would be catastrophic even as it is ill-timed.

According to observers, this has raised serious concerns on the quality of planning and coordination between the monetary and fiscal policy managers of President Mohammadu Buhari, and further explains why the economy has been on a progressive slide.

A key question with a trail of suspicion however is whether there is a correlation between the secret plan by the CBN Governor, Mr. Godwin Emefiele to change the face of the Naira and the recent appointment of President Buhari’s brother –in-law, Ahmed Halilu as managing director of Nigerian Security Printing and Minting Company (NSPMC) Plc. Since appointed in September, on the recommendation of Emefiele, they could be need to create activities capable of making the outfit liquid, observers have alleged.

Recall that the apex bank boss said he had informed the President and got his approval and no other authority knew of his plans, meanwhile, there are authorities in planning and budgeting as well as economic team of advisers to the President.

Another concern as captured among commentators and mostly social media users is that this new plan is an orchestration by the ruling All Progressives Congress(APC) to rig the 2023 presidential elections by starving opposition parties of funds for essential electoral purpose while providing funds for APC through the CBN.

Meanwhile, a serving Minister in a confidential conversation with MMS Plus at the weekend divulged that the new policy by CBN haspolarized Buhari’s cabinet members , saying that the import of the policy is yet to be fully appreciated by all. While some on the face value believe it is another strategy of checking the excesses of politicians in the coming elections, some others believe it would be counter-productive. He added that this could be a key subject of discussion in the next FEC meeting.

According to Mrs. Ahmed, who was at the 2023 budget defence with the National Assembly members on Friday, the CBN Naira redesigning policy, only got to her from the media like every other Nigerian. “Distinguished senators, we were not consulted at the Ministry of Finance by CBN on the planned Naira redesigning and I cannot comment on it as regards merits or otherwise.

“However as a Nigerian privileged to be at the top of Nigeria’s fiscal management, the policy as rolled out at this time portends serious consequences on the value of Naira to other foreign currencies.

“I will however appeal to this committee to invite the CBN governor for the required explanations as regards merits of the planned policy and rightness or otherwise of its implementation now,”she added.

The CBN Governor, had on Wednesday last week, said that the apex bank would redesign the country’s currency from 200 Naira denomination to N1,000 notes.

He said the action was taken in order to take control of the currency in circulation just as he posited that the bulk of the nation’s currency notes were outside banks’ vaults and that the CBN would not allow the situation to continue.

According to him, the planned policy was in line with Sections 19, Subsections a and b of the CBN Act 2007, upon which the management of the CBN sought and obtained the approval of President Muhammadu Buhari to redesign, produce, and circulate new series of banknotes at N200, N500, and N1,000 notes. The policy is expected to fully take off from February 2023

In his reaction, Dr. Muda Yusuf, Chief Executive Officer, Center for Promotion of Private Enterprises(CPPE) and the immediate past Director General of the Lagos Chamber of Commerce and Industry(LCCI), said: “All the issues outlined there as the objectives and purpose of this plan to redesign the currency, I can’t find any connection between the act of redesigning the currency and these objectives.

“They are talking about hoarding the currency, what’s the proof that if you redesign the notes today people would not hoard the new notes. They are talking about the fact that people are hoarding the new notes, you need to go around Lagos events centres; the new notes that you don’t find in the banks, you find them in event centres; people are hawking them. Where are they coming from? Are there not coming from the banks? In terms of policy, the issue of currency manipulation or redesigning has no impact on monetary policy.

“Currency as a proportion of money supply is less than 7 percent. The total value of currency you have in the economy is about 3.3 trillion; total money supplied is 48 trillion, so how would redesigning the currency have impact on policy? There is no connection at all. I don’t see this achieving any of these objectives!

“It’s just a very big distraction. It is going to impose a lot of cost on the economy because this is not going to be cheap, you are talking about providing 3.3 trillion currency notes, that’s a lot.

“Talk about the logistics, this is a very big country. How are you going to navigate all of that with many of the local governments not even having even one or two branches of banks. Then, you have these issues of flood, connectivity problems, you have an election coming up, how are you going to be dealing with this in a space of one and half months?

Dr Muda continued and posited it would create panic. “It is going to cause a lot of disruption and my advice is that we need to retrace our steps on this because I am not seeing any value. This is going to create confusion, we have a lot of people in remote villages where there are no banks.

He added that it is a potential threat to 2023 elections “because if people are busy out there in panic mood trying to see how they are going to exchange their money, it could disrupt the elections. So, the timing itself is even very wrong, in addition, this is not even bringing any value to this economy. So, I think they should be a rethink about this policy.”

On when it will be appropriate to redesign the notes given that Naira is long overdue for such in line with global best practices, he said, “You redesign for a purpose and you also need to situate policies within the framework of your priorities.

“Talk to any Nigerian, talk to any investor, this is the least of the problems that you have in this economy. I don’t think this is the way to go. In any case, in terms of electronic payments, we are already doing very well. Electronic payment in first seven months of this year, electronic payment was over 200 trillion, Point of Sale platform over 6trillion,mobile transfer over 9 trillion naira. These are the things we should be improving and consolidating upon. This is a very big distraction, it is unnecessary and it is going to be a waste of resources,” Dr. Muda emphasized.

Otunba Kunle folarin, a foremost economist and chairman of Nigerian Ports Consultative Council(NPCC)who raised a couple of questions begging for answers, opined that the exercise is a suspect.

“Why does the government want to change the colour of the naira? How much volumes of the notes are being printed? Why incur the cost and how can the cost be recovered? What is the place of exchange and the method of exchange? Who are the people hoarding the money in circulation?

“What are the security measures being put in place against counterfeiting new notes otherwise the money will lose value in exchange and could trigger further depreciation of the naira or a collapse of the currency? We have elections coming up, how are we going to service the elections?” Folarin concluded.

The statement issued by CBN on the naira redesigning policy left many questions unanswered but attempts to get clarification from the spokesman of the apex bank,Mr.Osita Nwanisobi met brickwall with irrational reaction: “Are you the one to manage the logistics and publicity for me? He echoed on phone in quarrel, when asked what plans was in place to ensure timely penetration of the notes to rural areas given the short notice of 46 days.

Neither the printing cost of the new notes was stated nor where it will be printed provided. The NSPMC currently lacks the capacity to print the Naira notes, it was gathered.

As of February 2015, Naira notes and coins were printed and minted by NSPMC and other overseas printing and minting companies but issued by CBN.

Nigeria went into partnership with De La Rue, the British bank note printing giant and so outsources its currency printing. Findings reveal that Ethiopa,Libya and Angola alongside 14 other African countries place orders from De La Rue. It is not clear how much it costs to print the Naira which excludes shipping cost.

Mixed reactions also trailed the Naira redesigning policy from different social media platforms. On facebook, one Okolie Ifeanyi posted in suspicion thus: “ Guys are celebrating this news without knowing the consequences. These guys(APC) control the CBN and they know that every political party would need money during the elections, hence the need to hoard cash. While other parties beg to get new notes, APC guys will have easy access to the new notes. It will serve as a big advantage to their victory. That is a rigging strategy!”

However, the Conference of Nigeria Political Parties(CNPP) had commended the CBN for its vision to redesign the Naira ahead of 2023 general elections, saying that only vote buyers will criticize the plan.