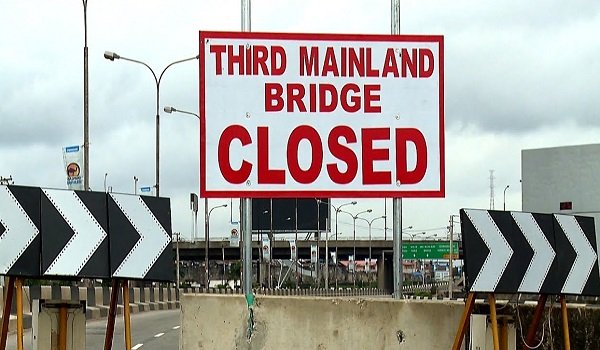 The federal government has shut the Third Mainland Bridge in Lagos to enable it carry out urgent repairs.

The closure was carried out at midnight on Christmas Day and will remain so until tomorrow.

A 48-hour partial closure of the Lagos-Ibadan Expressway will also commence tomorrow to enable the completion of a flyover bridge.

The Third Mainland Bridge has been undergoing repairs since July 24, necessitating partial closure, but the current 72 hour closure is total.

Federal Controller of Works, Lagos, Olukayode Popoola, said the closure was meant to allow the engineers working on the bridge to cast concrete on the expansion joints.

“If we allow vehicles to use one lane, there is going to be vibrations and the concrete will not set properly,” he said.

The repair was originally set to last six months but was extended by one month because of the #EndSARS protests in Lagos.

The repairs are now expected to be completed in February.

Popoola also announced that there will be partial closure of the Lagos-Ibadan Expressway for 48 hours from December 28 to December 29, to enable the completion of a flyover bridge.

He said: “The contractor, Messers Julius Berger, wants to install cross beams at Kilometre 16, that is, around MFM.

“That area will be cordoned off. There will be closure within that section from 12:00pm on 28th of December and it will be opened to traffic by 5:00am the following day.

“About 200 metres to that particular location we have a diversion, and another diversion 200 metres away from that place.

“One lane will be opened to traffic. It is only one lane we are closing to traffic at a time.

“The first lane that we are going to close is outward Lagos; that is the Ibadan bound carriageway. We will close it on the 28th.

He appealed for the patience and understanding of road users, saying that the construction was part of the progress that the Federal Government had achieved on the project.