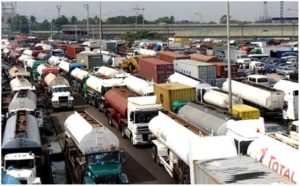 The forum on the theme: “Apapa Perennial Traffic Gridlock: Has it Defied All Solutions?” was held recently at the Rockview Hotel, Apapa, Lagos, as stakeholders objectively deliberated workable and lasting solutions to the menace of traffic gridlock.

In a paper presented by the president of MAJAN, Comrade Ray Ugochukwu, he recalled that members of MAJAN, publishers of The Powerful Pen Newspaper, had on December 8th, 2016, embarked on a protest march against the Apapa traffic gridlock, then at it infancy. The march took the members from Mile 2 to PTML customs, Tin Can Island Port, Lagos Port Complex, NSC, NPA headquarter and to Lagos state government house, Alausa, Ikeja, Lagos.

The MAJAN boss stated that “as a journalist, who have observed events in the industry for sometime, the Apapa traffic crisis was expected to happen. This is because the proponents of the nation’s port reforms threw caution to the wind in the processes leading to the port concession of 2006”.

Ugochukwu said that though the idea of port concession, on the surface, looked well-intentioned, the drivers had a hidden agenda, opining that it is that hidden agenda that has led to the devastating traffic in Apapa till today.

Stakeholders worried that 15 years after the flag-off of the country’s port concession, Nigerian ports are not business friendly, lack trading predictability, remain non-competitive, non-transparent neither efficient; also worried that after several seminars, workshops and conferences held on the same subject matter, with recommendations thereof, oftentimes culminating in one Government intervention or another, yet the situation persists.

A guest speaker at the summit, Chief Boniface Okoye, Chairman/CEO of Bonntex Nigeria Limited, summed up the claims of the companies having holding facilities as ‘fraudulent’

The Registrar of the NAGAFF Academy, Mr. Francis Omotosho noted that the gridlock started as small hold-ups when trailers started loading wet cargoes from the few tank farms that we had around the Port areas then, and that it snowballed into the gridlock that we have today as more tank farms appeared and then the federal government concessioned the ports to private hands without the usual Environmental Impact Assessment (EIA) carried out on the area and without the provisions for truck garages for the displaced trucks.

He concluded by saying that “The traffic gridlock has proved Herculean since the new millennium. Its incidence and impact worsened with the success of the concessions which prioritized private sector-led Port operations”.

With the outlook of the Nigerian economy being bright, coupled with possible exponential growth in agriculture and agribusiness, more exports from the Lagos ports system are expected. Although the government seemed handicapped for ready solutions, the latter-day efforts by the Nigerian Navy to clear the gridlock began to yield some results from mid-2018 following the barring of inner city roads to truck traffic.

However, the long term sustainability of such ad hoc measures is unpredictable. Hence an urban renewal and reconstruction programme to modernize city transport infrastructures and complete review of our ports master plans would seem a better remedial policy”.

Also speaking, the publisher of MMS Plus newspaper, Mr. Kingsley Anaroke described the gridlock as a situation of severe traffic congestion, which is also often defined as period when traffic volume exceeds road capacity.

He lamented that the road contraction associated with infrastructural and planning deficits is fast becoming a normal lifestyle in Apapa and its environs, with heavy economic burden and increasing life and health risk on daily basis.

According to Mr. Anaroke, “It is most appropriate to conclude that there is only one way to die in and around Apapa which is through Apapa traffic-induced death. We elect to die everyday, slowly as we wade through the traffic”, he said.

He, however, noted that by the end of this meeting, the resolutions be matched truly with workable actions that can complement the electronic truck call-up system initiative.