Single Window Project, Scanners Will Be Deployed In 2020 – FG 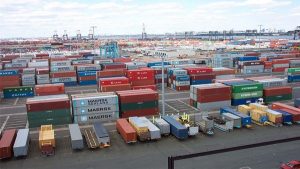 In a bid to curb the influx of substandard products into the country and ease the cargo evacuation process at seaports, plans are underway to operationalise the National Single Window project as well as deploying scanners at the nation’s seaports before the end of the year.

The Minister of Industry, Trade and Investment, Otunba Adeniyi Adebayo, stated this on Monday at an investigative hearing on the incessant influx of fake, substandard and counterfeit products into the country, organized by the House of Representatives Joint Committee on Commerce; Industry; Information; National Orientation; Ethics and Values.

Noting that there is an implementation committee at work, which he is a member, he assured that the team would ensure the Single Window and Scanners are deployed appropriately.

According to him, “this will significantly improve cargo turnaround time at our ports, promote efficiency and transparency, thereby removing the corruption opportunities that fuel the entry of substandard goods into the country, and enhance Nigerian ports’ competitiveness in the West African region.”

Meanwhile, the Federal Government has called on relevant agencies to further strengthen the enforcement of the Standards Organisation of Nigeria Conformity Assessment Programme (SONCAP) alongside proposed PEBEC reform interventions.

Under the programme, importers of a wide range of goods must obtain two certificates in order to operate: Product Certificate (PC), either unregistered, registered or licensed; and the SONCAP Certificate (SC).

The Special Adviser to the President on Ease of Doing Business, Dr. Jumoke Oduwole, represented at the hearing by Mrs. Oluwatoyin Bashir, said the action would further complement the efforts of the Buhari Administration aimed at improving efficiency at ports.

Dr. Oduwole also said the decision to streamline the operations of agencies at the ports was first implemented by the previous administration in 2011, and further reinforced in 2018.

She noted that the decision was based on empirical findings and taken following extensive stakeholder engagement after some agencies had returned to the ports.

Dr. Oduwole said streamlining agencies’ operations at the ports is at the core of Nigeria’s ease of doing business reforms and in line with global best practices aimed at removing bureaucratic constraints and reducing costs to doing business at the ports.

She, however, commended the Standards Organisation of Nigeria (SON) for the phased automation of compliance certification process amongst other innovations in their operations.

Earlier in his remarks at the opening of the hearing, the Speaker of the House of Representatives, Hon. Femi Gbajabiamila, represented by the Minority Leader at the House of Representatives, Hon. Ndidi Elumelu, commended the effort of the Joint Committee and was hopeful that the hearing will unravel the root causes of the menace of influx of counterfeited products into Nigeria.

In his opening remarks, the Chairman of the House Committee on Commerce, Hon. Olufemi Fakeye stated that the hearing was vital to curbing the incidence of substandard products that has led to avoidable incidents in the country.

He said the hearing “will also contribute to the arduous task of addressing the challenges of eradicating imported counterfeit products, particularly in view of Nigeria’s commitment to the African Continental Free Trade Agreement.”

With the Single Window, port community portal and functional scanners at the ports, PEBEC aims to ensure that save the exception of the lead agencies, Nigerian Customs Service, Nigerian Ports Authority and Nigerian Police Force, there will be little or no need for routine physical examination of cargo by additional agencies at the ports.

Presentations were also made by the representatives of SON, National Agency for Food and Drug Administration and Control (NAFDAC), amongst other stakeholders.