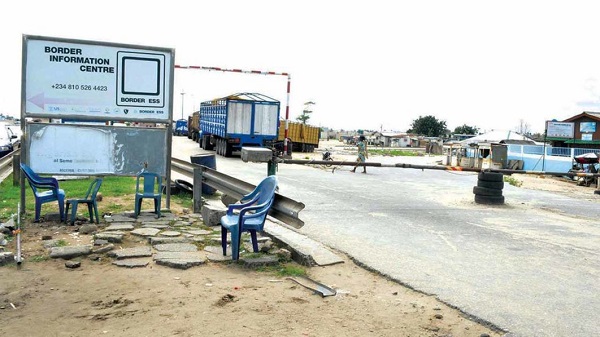 Nigeria may witness an influx of arms and ammunition, hard drugs like cocaine, marijuana and other items classified as contraband in the next few days, as security operatives along the border routes have deserted following the #EndSARS protests which resulted to attacks on security officers.

The safety measures attained with the closure of Nigerian land borders may be eroded as the nation’s borders are unguarded as security agents have jettisoned their posts following killings of security officers.

Although the Nigerian Police have been the target of the besieged killings by hoodlums disguised as protesters, security personnel for Nigeria Customs Service (NCS), Federal Roads Safety Corps (FRSC), Nigerian Immigration Service (NIS), among others on the border routes have abandoned their duties for fear of being maimed since Wednesday October 21st, 2020.

While the closure of the nation’s land borders for over a year has resulted in reduction in arms and ammunition smuggled into the country as well as other items like rice, poultry products, textile, vehicles, hard drugs, among others; the recent protest and mysterious developments have left the border areas unguarded.

Officials of the NCS and Nigeria Police have been identified as the major violators of Economic Community of West African States (ECOWAS) protocol on free trade and movement within the Nigeria–Ghana transport corridor, with over 25 checkpoints and roadblocks mounted between Seme and Badagry bridge, however, MMS Plus observed that the checkpoints were limited to three last week.

The checkpoints and road-blocks mounted on this international route by the Nigerian security personnel in less than 5 kilometer stretch shows that Customs has 11, Police 11, Nigeria Immigration Service (NIS) 3, Department of State Security (DSS) 1, and the Nigerian Army (NA) 1.

On the other stretch of the road; from Badagry to Mile 2, there are over 40 checkpoints for Police, Customs, FRSC and Immigration that were jettisoned as the security personnel didn’t turn up following the protests and killings.

Some Customs officers at the Seme and Idiroko Commands also confirmed these reports as they stressed that the patrol officers have been advised to keep off the roads.

According to a senior Customs officer at Idiroko who discussed with our correspondent last week, it isn’t a good time to visit the border region.

Speaking with MMS Plus newspaper, the President of Africa Association of Professional Freight Forwarders and Logistics of Nigerian (APFFLON) Mr. Frank Ogunojemite admonished the government to speedily address the situation as it could lead to an influx of arms and contraband.

His words: “This is a really volatile situation. There are no officers on the border routes anymore. It’s not just Police. There’s no Customs, Immigration or FRSC on patrol in the Seme border area or Idiroko region. While the border remains closed to legitimate trade, the fact is that there are several unapproved routes which smugglers use but could be intercepted by officers on patrol. We have to address this situation before it leads to an influx of arms, hard drugs and other contrabands in the country.”

According to Nasiru, only those doing illegitimate businesses could benefit from the absence of security agents at the border as truckers are stuck with the border closure.

“Truckers have left the border areas since the closure of the land borders. It is a shame that some of our members still have trucks stuck on either side of the border. On Wednesday, I drove from Ibadan to Lagos and I was shocked to find no checkpoint for Police, Customs or FRSC. I wasn’t shocked by this because we have seen how hoodlums hijacked the protests to attack police and other security men,” he told our correspondent on Friday last week.

The WARTU spokesman admonished the government to swiftly set up a joint security team to address the lacuna, nevertheless, he warned that the security officers should display the characteristics attributed to FSARS on the roads.

However, when contacted, the National Public Relations Officer of NCS, Mr. Joseph Attah dismissed reports that Customs officers have jettisoned their duties.

“The youths haven’t overwhelmed Customs and other security personnel at the border posts. Such reports are spurious and I would advise against spreading this kind of information. There are Customs officers putting their lives on the line to stay at their posts. The Customs Federal Operations Unit (FOU), the border drill and the joint-border team are still in place and functional,” Attah said.

In another development, the Federal Government has been admonished to speedily provide fiscal palliatives for indigenous airlines as the operators are burdened with debts following the economic challenges since the outbreak of COVID-19.

The Chief Executive Officer of Top Brass Aviation Limited, Mr. Roland Iyayi, made this appeal during an exclusive chat with MMS Plus newspaper, recently.

Noting that Singaporean airlines were supported by the government with $6.9. billion, he said this was done so that Singapore would be able to meet up the obligations for all the aircraft on its fleet despite the pandemic.

“Singapore is just an island not like they have major airports like we have in Nigeria. The point is they recognized that the airlines bring and take people in and out of Singapore for commerce and for that reason; they cannot have a situation where that access breaks down. Similarly, local airlines in Nigeria are the main source of economic activity within a country, especially with the state of insecurity in the nation,” he said.

He stressed that the COVID-19 pandemic meant that airlines had to pack over 50% of their fleet, as we speak most airlines are still struggling with about 25% of their capacity because they do not have funding to bring those airplanes out of storage.

“As operators, we can’t fly these aircrafts again because the NCAA requires that airlines carry out minimum maintenance all through that period. Whether or not you fly and whether or not you are earning money, this maintenance was required. At the same time, airlines need to train crew that is a cost element that cannot be shy away from. There is also the insurance element. Over this period, airlines had to pay aircraft leases, irrespective of pandemic, because that wasn’t taken care of in the lease agreement signed. How do you deal with that?” he queried.

Iyayi urged the government to prioritize the issue of the palliatives to airlines, adding that; “the airlines are currently operating out of a situation where they don’t want to be seen as holding the government into ransom but the reality is that few are operating with borrowed resources. They borrowed against a situation where the factors are very low, the overheads are fixed.”

According to the former Director-General of the Nigerian Airspace Management Agency (NAMA), the government should also meticulously introduce policies in the aviation sector as hostile policies have been responsible for expensive air travel fares in the country.

“It is important for the government to appreciate the very pivotal and important roles that airlines play in the economy. In Nigeria, it is unfortunate that some major pronouncements by public officers indicate that the aviation sector is elitist. That’s the impression that I get. If a Minister of Finance is saying that aviation is elitist so it needs to be taxed, then we have a problem in the sector. People quickly ask how many people can afford aviation, but such a perspective is wrong,” he added.