The House of Representatives on Wednesday asked the Federal Government to stick to the 2020 end date for gas flaring in the country in order to cut the harmful effects of the practice on the environment and the huge economic losses to the country.

Worse still, the House observed that International Oil Companies operating in the country had defaulted in the payment of the $3.5 penalty the government set per 1,000 SCF of gas flared.

Three key committees of the House were mandated in a resolution to liaise with the appropriate organs to ensure that the government stuck to the exit date.

The session, which was presided over by the Speaker, Mr. Yakubu Dogara, directed the committees “to interface with the Ministry of Petroleum Resources and the Department of Petroleum Resources on government’s policies and regulatory rules towards actualising the exit date of 2020 for gas flaring in Nigeria and report back to the House within eight weeks for further legislative action.”

Lawmakers passed the resolution in a unanimous voice vote after a member from Edo State, Mr. Johnson Agbonayinma, moved a motion asking the government and the IOCs to save Nigeria’s environment and economy by ending gas flaring.

Citing available statistics from the World Bank, Agbonayinma observed that Nigeria ranked second on the list of highest gas-flaring nations, emitting “over four billion dollars’ worth of gas annually.”

Besides, Agbonayinma informed the House that the DPR, in its 2015 report, had indicated that the flared gas could generate 3,500 megawatts of electricity for the country.

He added that this was an equivalent of three trains of Liquefied Natural Gas, representing a loss of over $1bn revenue or over 60 million barrels of oil equivalent.

Agbonayinma’s motion read in part, “Also note that the Nigerian Extractive Industry Transparency Initiative, in its 2014 Nigerian Oil and Gas Report, disclosed that in 2008, the Federal Government, in its fiscal regime for the petroleum sector, set a penalty of $3.5 per 1,000 scf of gas flared by oil companies, observing, however, that the companies have refused to comply with the directive.

“Gas flaring results in the release of methane, which is accompanied by other greenhouse gases that account for about 50 per cent of all industrial emissions in the country and 30 per cent of the total C02 emissions, which are harmful to humans, the economy and the environment.” 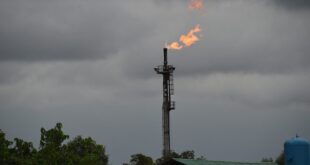