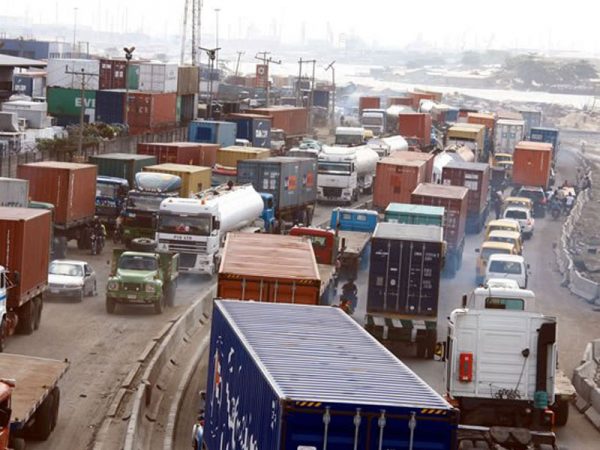 The corrupt squad is allegedly led by the Area B Police Command who allegedly passes 48 trucks daily between 1am and 4am; while NPA, Shippers’ Council, also have daily slots.

While the syndicate is said to be led by the Police boss as the frontline organizer, sources state that the Lagos State government has been abating the scandal with reports that the Special Adviser to the Lagos State Governor on Transportation, Mr. Toyin Fayinka isn’t unaware of the sharp practices.

Several truck owners who subscribe to the syndicate group have their trucks enjoying prioritized access to the ports on a daily basis while those who comply with due process are trapped at the Lilypond Truck terminals for days or weeks.

During an interview with our correspondent last week, a source who preferred anonymity posited that the Area B Apapa District Police Officer, Olanrewaju Edegbai personally plays the lead role as the ‘mover’ of trucks that have given bribes to access the Apapa ports without recourse to ETO and the Lilypond arrangement.

“The Area Commander comes to the bridge by 1am every morning to clear the road and directs some trucks to start passing. After those special interest trucks pass, he leaves and other security agents repeat the same trick to pass their preferred trucks based on monetary settlements and they jam the road. Who will correct this anomaly when an Area Commander and DPO is doing the job of a mover? How will they tell the rank and file not to do the same?”

However, when contacted by our correspondent, Edegbai dispelled the claims arguing that his responsibility at the Apapa Police Area has been targeted at protecting lives and properties.

“There is a taskforce that has been constituted by the Lagos State Government to regulate truck movement or clear the obstruction leading to the ports. Get your findings very clear. I’m not a party to crossing trucks and I don’t know any police officer doing that,” he told MMS Plus.

Edegbai blamed the Lagos taskforce for the anomaly on the port access road, arguing that since the Comrade Kayode Opeifa-led task team was replaced, the new task force hasn’t identified with his command.

Contrarily, a chieftain at Nigerian Association of Road Transport Owners (NARTO), Alhaji Inuwa Mohammed maintained that the corrupt practice by the police is real, even as he roped in other security agencies in what he  described as “a calculated and comprehensive corrupt practice.”

Noting that there is a lot of confusion with the strange developments and several anomalies on the port access roads, he opined that the best approach would be to have an engagement with stakeholders and the security agencies involved as operators can’t continue practicing in such an environment.

Although efforts to reach the Special Adviser to the Lagos State Governor on Transportation, Mr. Toyin Fayinka to get clarification were futile until presstime, sources have dismissed the Apapa gridlock as a plague capable of ridiculing the most noble men.

One of the leading truck operators in Lagos who preferred anonymity said; “The money people are making from Apapa Traffic gridlock is so much; they can kill for it. We pay N31,250 for each truck daily under ETO. If the truck fails to leave the Lilypond truck park by the following day, they also charge for demurrage for the delay that isn’t caused by the truckers.”

The truck fleet owner expressed regret that in the penultimate week only seven of the company’s trucks could access the ports, when the company previously moved hundreds of trucks on a daily basis.

“We have got to a stage where we may be forced to join the corrupt practitioners. This trucking business is my only source of livelihood and I’m looking for how to join this corrupt system. My problem is that I can’t pay N80,000 daily to pass trucks, yet some truck owners are paying more than that. The benefit is that this category of truck owners go in everyday while those of us still doing due diligence pay N31,250 to utilize ETO and wait at the Lilypond terminal for days or weeks. Throughout last week the total job my company did was 7 trucks, previously I moved hundreds of trucks in one day. My trucks entered Lilypond on Tuesday and couldn’t enter the port until Saturday. Whereas, those who pay N80,000 and above don’t enter Lilypond but access the ports daily from the bridges,” the source said.

There are also concerns that ETO has ushered in new heights of corruption with truck codes stolen by officials at the Lilypond terminal and sold to other truckers who access the ports illegally.

“While in Lilypond, customers’ codes are stolen by the staff and sold to people on the highway to access the ports, meanwhile, the real owners of the code are waiting endlessly at Lilypond Truck Park. This unfortunate situation has happened to one of my truckers. His truck was inside Lilypond terminal, by the time they passed him to approach the port gate; he got there and found that the code had been used. The truck that used the code was still inside the port. The best solution would have been to arrest the truck and take it to the police station, but no one was ready to do that. He approached someone else in the port who collected N80,000 and sold another code to him. That was how he accessed the port with another person’s code,” our source said.

Confirming this, NARTO Chieftain, Alhaji Inuwa said this was the height of the ETO complexities that led him to jettison trucking in the past one month as his trucks have been parked at his garage, while he focuses on other business ventures.

“Some people spend over a week at Lilypond before they are allowed access to the ports. On Thursday last week, there was a planned protest by truckers along the Apapa port access road. The major problem was the hardship and abandonment of trucks for days or weeks at Lilypond,” Inuwa said.

On the complaints of truckers at Lilypond having their codes already utilized to access the ports by other trucks who didn’t patronize ETO, Inuwa said; “This explains why it is a calculated arrangement. How would an outsider get the legitimate code of a trucker in Lilypond, if someone didn’t leak it? What we are seeing with ETO is worse than what we have ever seen. This regime of the Special Adviser to the Lagos State Governor on Transportation has been the worst for truckers.”

Presently, there are about 11 checkpoints between Tin Can port gate and the Liverpool bridge and these checkpoints are extortion points for touts who are representing security agents. The situation is worse from Mile 2 to Tin Can Island port because there are over 20 checkpoints.

According to Inuwa, one of the solutions to the port access menace is to approve more truck parks for call-ups.

“Why should someone who has a truck park a few kilometers from the port have to move his trucks to farther distance in Lilypond or the few approved truck parks for call-up? In the last one month, I have decided to park my trucks and face other businesses until I see that there is sanity on the Apapa port corridor. At this moment I can’t differentiate the fake call-up from the real one and I can’t afford to engage the multiple checkpoints for extortion,” he lamented.

Also speaking with our correspondent last week, the Secretary of the Committee of Maritime Truck Unions and Associations (COMTUA), Mr. Stephen Okafor noted that the ETO platform worked for two weeks before people realized that the platform didn’t have the required equipment to make it work and hijacked the system.

Okafor argued that the online platform was launched prematurely as the road infrastructure and IT facilities weren’t set for such innovation.

Noting that ETO wasn’t even deployed at the Tin Can port axis, he admonished NPA and the new task team to study the challenges and work towards addressing them.

In a related development, FRSC boss, Dr. Boboye Opeyemi has revealed plans to start clamping down on rickety trucks along the port corridor, but there is an ambiguity on the qualities that define the rickety trucks to be arrested.

Recall that the regulation of trucks at the ports started when Chief Michael Ajayi was General Manager Western Ports of NPA. He stressed that minimum standards for such trucks was a presentable truck with functional lights, brakes and others.

NPA had a team that came to garages of truck owners to do physical examination and sensitization. The Authority also assembled the individual trucks owners at Brawal, inspected and registered their trucks, meanwhile, the mode of operations for FRSC is yet to be revealed.

Speaking with MMS Plus on this issue, the Chairman, Association of Maritime Truck Owners (AMATO) Chief Remi Ogungbemi  said; “firstly, we don’t manufacture trucks in Nigeria. We all rely on used trucks and these trucks have a history from one country to another before getting to the shores of Nigeria. FRSC should also understand that we’re looking forward to government’s intervention so that we can have better trucks on our roads because with the current economic situation it’s going to be extremely difficult to acquire new trucks”

Noting that Boboye complained about the rickety state of several trucks, the AMATO boss stressed the need to address the state of the roads which also contribute to the durability of vehicles. “Most of our roads are not worthy but FRSC promised to speak with the Federal Ministry of Works to make sure the roads are standard,” Ogungbemi said.

While stressing that N30million to N40million is a huge sum and beyond the reach of most truckers in the present economy, he also noted the need to have a befitting place to serve as a truck terminal.

“I don’t know what standards FRSC are looking at; but it is a good venture to have only standard trucks plying the roads and accessing the ports. The truth is that most of the trucks in the country are 30 years old or more. This crusade of eradicating rickety trucks has been on for ages but it hasn’t been successful because there is no commensurate approach to refleet the trucks,” he said.

Meanwhile, the NARTO chieftain, Inuwa admonished FRSC officials to have a human face even though they are doing the right thing.

“A good and standard truck is an asset to the owner. However, some of the trucks without number-plates, lights and broken parts are the result of corrupt security agencies and touts. These people destroy number-plates and lights in a bid to extort truckers. When the driver fails to give them money, they smash the headlights, brake lights and side mirrors. FRSC should also address this issue,” he said.