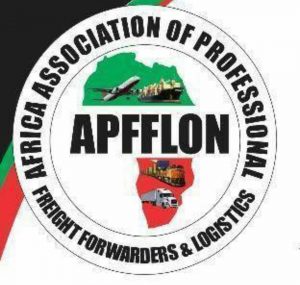 Africa Association of Professional Freight Forwarders and Logistics of Nigeria (APFFLON) has advised the Minister of Transportation, Hon. Rotimi Amaechi to be wary of some freight forwarders vying for a place on the Governing Board of Council for Regulation of Freight Forwarding in Nigeria (CRFFN) just to embezzle funds.

The freight forwarding group made this appeal in a press statement issued today, signed by its National President, Otunba Frank Ogunojemite.

However, APFFLON thanked the Minister of Transportation for extending invites to all who purchased forms for the election into the Governing Board of CRFFN to meet with him.

According to the notice signed by Mr.Ewache A. Victor, Deputy Director, Inland Container Depot, on behalf of the Hon. Minister, every Contestant is expected to meet with the Minister on Friday 26th November, 2021, at Federal Ministry of Transportation Conference Room, to discuss the way forward .

The group said that it is happy that the Honourable Minister has demonstrated fairness by the general invitation.

“APPFLON as an advocacy group,has strongly condemned the dirty politics that has bedeviled the planned Council election which ought to have been done and dusted before now.”

Recall that APPFLON recently berated the Registrar of the Council for excluding individuals and corporate bodies who form part of the Council’s membership as provided by the Act establishing it, from a meeting where only the Presidents of Associations and their Secretaries were invited on the 10th of November, 2021, at Rockview Hotel, Apapa, Lagos.

“APPFLON protested against the invitation of one out of the three categories that form the Council’s membership as it was a clear violation of Section 4 of the Act. The Hon. Minister of Transportation has proven that he has a listening ear by inviting all the contestants and not only those being sponsored by the so called “accredited Associations”.

‘We appreciate the Transport Minister for taking a bold step toward finding a lasting solution to the lingering imbroglio. We also want to advise the Minister not to take seriously those whose interests lie on the sharing of Practitioners Operating Fee (POF),” the group said.

According to the group, the expectation of every stakeholder freight forwarding value chain is a free and fair CRFFN Governing Board election as there is need for radical change in the industry.

“We strongly believe in the ability of the Minister as well as his uncompromising stance on the conduct of a rancour free CRFFN Governing Board election,” the report stressed.