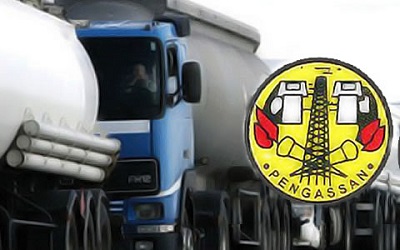 Protesting members of the Petroleum and Natural Gas Senior Staff Association of Nigeria on Thursday threatened to shut down oil production in Nigeria for 30 days if the Federal Government fails to curb the lingering massive oil theft in the Niger Delta.

Members of the union staged protests in various parts of Nigeria including Abuja, Warri in Delta State, Kaduna and Port Harcourt in Rivers State.

Findings by our correspondent showed that should the workers implement their threat, Nigeria might lose about N1.37trn from the non-production and sale of crude oil, a major foreign exchange revenue earner for the country.

Speaking at the sensitisation rally that was held at the Delta State Governor’s Office Annexe in Warri, the PENGASSAN Zonal Chairman, Prince Audu Osihiokhamele, noted with concern that “the big men doing the business of crude oil theft are in government.”

He added, “They say they load vessels, but we don’t see any. Is it a needle?”

He then declared that failure by the authorities to find lasting solutions to the menace would push PENGASSAN into taking more drastic actions.

“We will shut down the country for 30 days until we all come to the round table to unravel the mysteries surrounding the thefts,” Osihiokhamele stated.

He added, “PENGASSAN will resort to shutting down production for 30 days by withdrawing members, both onshore and offshore, wherever they are producing crude, should the government fail to hearken to this warning.”

An analysis by The PUNCH showed that by shutting down oil production for 30 days, the country could lose about 30.03 million barrels of crude, valued at an estimated N1.37trn.

Figures from the Nigerian Upstream Petroleum Regulatory Commission showed that in January, February, March and April 2022, the country’s crude oil production (without condensates) were 1.39 million barrels per day, 1.26mbpd, 1.24mbpd and 1.22mbpd respectively.

This means that should the workers shut down production for 30 days, the country would not produce about 30.03 million barrels of crude.

For the prices of oil during same eight-month period, data from countryeconomy.com, an international analytical firm, showed that the average monthly costs of Brent, the global benchmark for crude, was $86.51/barrel in January, $97.13/barrel in February and $117.25/barrel in March 2022.

The protesters besieged Delta State Governor’s Office Annexe in Warri on Thursday as at 8 o’clock in the morning.

The governor’s office complex was jam-packed with the placard-carrying protesters, who sang solidarity songs, condemning the massive crude theft.

They called on the government to take urgent and proactive measures to checkmate the ugly trend, which they said had virtually crumbled the national economy.

They lamented that Shell and Mobil had been compelled to relocate and divest following unbearable crude oil theft coupled with pipeline vandalism.

Also speaking, Prince Emea Okorie, PENGASSAN Group Chairman, NNPC Ltd, Warri, expressed concern that Nigeria could no longer meet its OPEC target of 1.8mbpd, as the country was “presently struggling to meet 1mbpd due to thefts.”

Addressing the gathering, Mrs. Violet Onowakpokpo, the Director, Governor’s Office Annexe, Warri, said the protest was a noble course. She commended the participants for their patriotic and peaceful disposition.

She said the issue at stake was affecting everybody, stressing that the struggle must continue until there was enduring peace in the sector.

The National President, PENGASSAN, Festus Osifo, who led the protest in Abuja, called on the President, Major General Muhammadu Buhari (retd.), to sack his service chiefs in 30 days if the massive theft of cruse oil continues.

He said, “We have said over and over again that the President of Nigeria should sit up. He is the Minister of Petroleum Resources. He is also the Commander-In-Chief.

“He must act. He must give KPIs to the security chiefs and he must give them a timeline. Give them one month, if there is no appreciable progress, then you sack them.

“You bring in new set of people who will go into the details to investigate the entire security outfit that you have sent to the Niger Delta. Anyone who is found culpable should go to jail.”

Osifo said the union had repeatedly engaged stakeholders over the last one year to proffer solutions to the problem of oil theft and pipeline vandalism, but that the engagements had not yielded results.

“In the last one year, we have been engaging all stakeholders and we have been trying to proffer solutions on what we think could resolve this impasse on crude oil stealing and pipeline vandalism,” he said.

He added, “We have engaged all the stakeholders, from the regulatory agencies to the operators, to the security chiefs, in other to find a solution to this menace, but we have realised that those engagements have not yielded the desired results.”

Osifo said the problem had continued to degenerate, while vandals and oil thieves got emboldened, causing the shutdown of oil production in the Niger Delta.

He added that over 95 per cent of crude oil in the pipelines were stolen, and that members’ welfare and jobs were being threatened.

The PENGASSAN president said, “A lot of companies operating today in the Niger Delta, most especially, in the land regions, shut-in their production, they don’t produce anymore, in most of the land locations.

“It’s affecting literally every single operator in the Niger Delta. They shut down their production because their efforts became fruitless. When you pump in 10,000 barrels into the pipeline, at best, you are going to get about 1,000 barrels from there.

He appreciated the protesters for keeping the protest peaceful and promised to relay their message to the IG, for onward transmission to the President, and assured them of further actions on the issue.

He also appreciated members of PENGASSAN, stating that the NNPC boss was also doing his best to nip the situation in the bud.

He added that the vandals in the South-South were equally citizens of Nigeria, and needed sensitisation to be de-radicalised and allow investors in the country and the region to thrive.