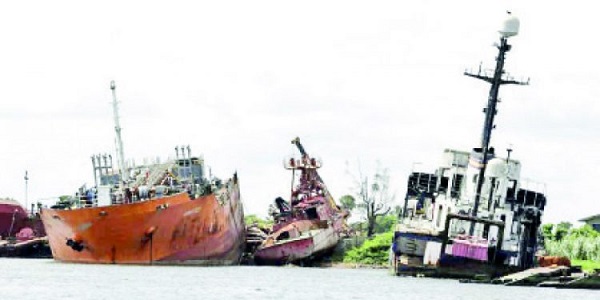 There are over 50 ship wrecks and 27 abandoned barges littering the marine environment in Lagos State and consitituting navigational threats and safety hazards in the State which hosts Nigeria’s biggest busiest seaports at Tin Can Island and Apapa.
Research by MMS Plus shows that these derelicts litter the waterways in Lagos from Badagry to Ojo, Ojo to Liverpool, Marina to Ikorodu, Mile 2 to Apapa, Ikoyi and several other coastal areas; posing huge threats to entire maritime industry expected to contribute significantly to Nigeria’s economic growth.
Last week, in one trip from Ojo ferry terminal to Liverpool ferry station in Apapa, our correspondent counted 27 ship wrecks and 17 abandoned barges on the water channel while several speed boats, ferries and barges were seen maneuvering through the route.
Recall that the Nigerian Maritime Administration and Safety Agency (NIMASA) has been delegated the onus of removing these wrecks and derelicts which also  contained in the establishing Acts of the National Inland Waterways Authority (NIWA) and Nigerian Ports Authority (NPA).
NPA and NIWA delegated this onus to NIMASA after a joint meeting of maritime Chief Executives last year, noting that the move would curb wastage of government revenue and avoid duplication of functions by the agencies.
Speaking with MMS Plus on the wrecks, the Terminal Manager, SIFAX Ojo Jetty, Mr. Felix Omojoye noted that the abandoned ship wrecks and barges along the waterway has been a major concern to ferry operators and waterways passengers on the Ojo-Apapa channel.
He appealed to NIMASA, Lagos State Waterways Authority (LASWA) and NIWA to expedite actions to remove the wrecks as well as other abandoned crafts on the waterways.
According to him, the regulatory agencies shouldn’t wait for operators to cry out or accidents to occur before carrying out their obligations which would ease operations of marine activities.
On his part, the Managing Director of Tarzan Marine Enterprise, Mr. Ganiyu Balogun also told our correspondent that the challenge of ship wrecks and abandoned barges is also prevalent at the Ikoyi water channel.
Balogun, who is also the President of the Association of Tourist Boat Operators and Water Transporters of Nigeria (ATBOWATON), said; “This issue of ship wrecks and other abandoned crafts on the waterways is a major problem. However, the Ikoyi area isn’t as bad as the Ojo-Ibeche beach axis. We have been told that the government has plans to remove these wrecks but I don’t know how soon that would happen.”
According to him, ship wrecks pose navigational hazards for boat operators whose practice have become more cumbersome in recent times due to the rainy season.
While encouraging the regulatory agencies to speed up the process of removing the wrecks, he beckoned on boat operators and waterways passengers to be more concerned about safety on the waterways.
“Besides the wrecks, boat drivers should be patient and careful while navigating during this rainy season. We can’t blame the government or regulators for accidents that accrue from boat drivers carelessness. Also, the passengers should insist on getting and using their life-jackets and ensure that boats aren’t overloaded,” Balogun said.
In January this year, the Minister of Transportation, Hon. Rotimi Amaechi identified marine environment management as a crucial factor that enables the maritime sector to contribute to national economic growth. Indeed, a clean and safe marine environment is the bedrock that ensures the entire maritime industry contributes significantly to the growth of a nation.
When contacted, the Director General of NIMASA, Dr. Bashir Jamoh told MMS Plus that the agency has obtained Federal Executive Council (FEC) approval for the removal of wrecks from Badagry to the Tin Can Island channel.
Describing the menace of ship wrecks as a recurring challenge, the NIMASA boss noted that the recent FEC approval was for the first phase removal of wrecks and derelicts on the nation’s waters.
According to Jamoh, the contractor is expected to conclude legal documentations, other requirements and commence the operations in the next one month as NIMASA disburses part of the funds.
“Since removing the wrecks is just one part of the problem, I have been asked where we intend to keep them. These are large items that could also generate revenue through recycling and NIMASA is in partnership with the Nigerian Railway Corporation (NRC) to warehouse these items. I have also obtained the support of the NRC Managing Director, Engr. Fidet Okhiria as a partner towards reviving the foundry for the recycling of the soon-to-be-removed wrecks in our waters,” Jamoh said.
The NIMASA boss revealed that plans have been initiated to commence recycling activities with a South African company engaged for technical expertise and knowledge transfer to Nigerians, while the funding of the recycling activities will be carried out by NIMASA and the Bayelsa State government.
Besides recycling into plastics, the NIMASA boss also opined that the wrecks could be raw materials for ship building as the nation also intends that expand that sector.
Although he didn’t reveal the sum and other details of the approval by FEC for the exercise, the NIMASA Director General assured that the agency’s Director, Public-Private Partnerships (PPP) would make the details available to the public soonest.
Meanwhile, he added that over 1000 direct jobs will be created by the recycling activity expected to commence in few months, adding that the option of recycling would reduce the enormous cost of removing the wrecks.
“Although NIWA and NPA have provisions in their Acts to remove wrecks, only NIMASA has the mandate to receive these wrecks. We also receive them from companies like Shell who may have such items in their facility and remove it promptly instead of waiting for the government. They bring these wrecks to NIMASA and these items have to be channeled towards recycling or as raw materials for ship building,” he added.
2021-05-16
+mms plus