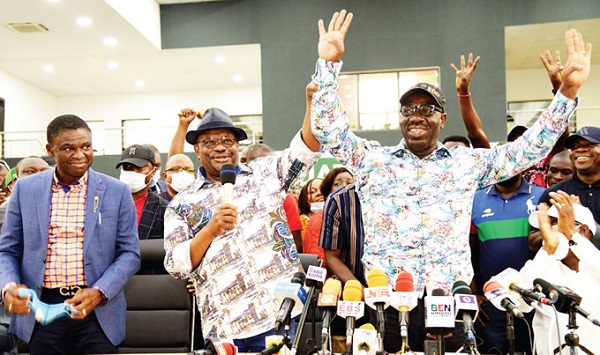 The Edo State Governor and governor-elect, Godwin Obaseki, on Monday, hailed the Edo people for ensuring his victory at the state governorship election.

He noted that his reelection had put anl end to godfatherism and ensured that ‘the lions and tigers’ were permanently caged in the zoo.

Obaseki said this while speaking to party supporters at the Museum Ground, Kings square in Benin City after a victory road show across various streets in the metropolis.

Obaseki said, “The message of Saturday’s governorship election for this government is to go and work for Edo people. It is clear and Edo people have spoken that we should work for them and transform the state.

“You have helped me cage the lions and tigers in the state. You will never see them again in Edo State because they are all in the zoo now where they belong. Today, I promise you that we will work for Edo people because no one will hinder us from delivering the dividends of democracy to Edo people.

“I will collaborate with my brother and deputy governor, Philip Shaibu to work for Edo people. I thank everyone residing in Edo State; you have spoken and we have heard you and are ready to work for you.”

The National Vice Chairman, South-South of the Peoples Democratic Party (PDP), Chief Dan Orbih noted, “Saturday’s governorship election shows that Edo people have rejected godfatherism, money-bag politics and given a mandate for the development of the state.”