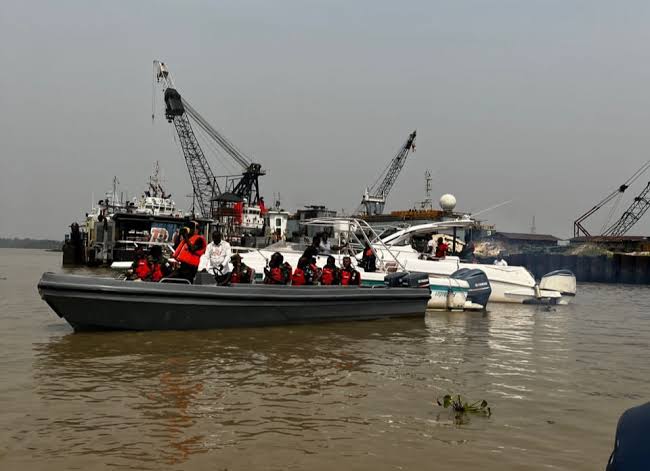 In the first of two recent high-profile discoveries by Tantita Security Services, the Maritime Intelligence Unit of the Private Security Contractor, PSC, was tipped off on the activities of a suspected vessel on December 22, 2022.

A statement issued by the NNPC stated that the security outfit mobilized and raided the location where they discovered an unpropelled barge.

The unpropelled barge was alternately loading Crude Oil and illegally refined Automotive Gas Oil (AGO) in a tight creek area from an illegal storage facility within the vicinity of Agge, a short distance from the Right of Way of the Trans Ramos Pipeline (TRP).

Upon investigation, the barge “BRIGHTON-1” was discovered to be unregistered and undocumented with the appropriate maritime authorities.

The statement said the Barge was arrested alongside a large wooden canoe used in conveying illegally refined AGO and a locally built wooden Tug powered by Caterpillar Fiat 850 Engine.

According to the statement, four suspects were also arrested on board the vessels.

The suspects are the Marine Engineer coordinating the BRIGHTON-1 loading and discharge operations, the skipper of the wooden Tugboat, a Ship Chandler providing logistics and supplies to BRIGHTON-1 and a speedboat driver that was delivering supplies to the BRIGHTON-1.

In the second discovery, an unregistered truck loaded with Crude Oil was apprehended in the early hours of December 10, 2022, discharging its illegal contents into the underground storage tanks of a fuel station belonging to Blessed Corporate Oil and Gas services Ltd, located opposite Asjam Hotel Opete, Warri.

Personnel from the Nigerian Army 3rd Battalion in Warri have secured the discovery location and the truck used for the operation.

The PSC also arrested four male suspects in connection with this discovery. Also recovered were two fuel-pumping machines being used for the operation.

It should be recalled that on May 2, 2019, the IGP Special Task Force on Pipeline Vandalism attached to the PPMC Depot Warri arrested four suspects with links to the owners of Blessed Corporate Oil and Gas services Ltd over the alleged involvement of vandalism and crude oil theft.

Investigations are in full swing, and efforts are being intensified to unravel the identity of the criminals involved in these recent discoveries.

In August, crude oil theft forced Nigeria’s production down to 1.1 million barrels per day far below the OPEC quota for the country.

By implication, crude oil theft cut the contribution of foreign exchange earnings from crude oil export from 90 per cent when production was high to 78.5 per cent as of the third quarter of 2022.

Crude oil export as of the third quarter of 2022 was N4.65trn down by 21.15 per cent from the N5.907trn recorded in the second quarter of 2022, according to the National Bureau of Statistics ‘Foreign Trade’ report published this week.

“What it does is to bring together the security and intelligence agency in one table, the regulators in the other and then bring in what was zero, the community into the other angle and without the community, we can’t achieve that.

That is why you can see we are now from 1.1mbpd daily to about 1.59bpd as at today this morning. So, these are some of the things that we are able to record based on the new security architecture,” he said.

Wunti assured that with the collective resolve of private securities and government securities there would be further improvement in crude oil production which would, in turn, reflect in foreign exchange earnings.

Currently, over 68 vessels involved in crude oil theft have been arrested, while 638 illegal refineries out of 763 have been destroyed.

According to him, the security architecture has been institutionalized, adding that the NNPC engaged three contractors including Tompolo’s Tantita.

The recent increase in electricity tariff by power distribution companies, as approved by the Nigerian …