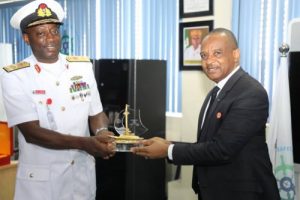 The Nigerian Maritime Administration and Safety Agency (NIMASA) has proposed to assist in the accreditation of professional courses offered by the Nigerian Navy and also facilitate the attainment of international convention on Standards of Training, Certification and Watchkeeping for Seafarers (STCW) status for the Nigerian Navy’s training institutes.

Jamoh spoke in response to requests by Lawal, who believed collaboration between the Nigerian Navy and NIMASA was required for success of the country’s maritime goals.

The Director General said, “NIMASA is all for anything that would enhance safety and security in our waters and promote shipping. This is in line with our mandate. We would support and advance courses and causes geared towards maximising our maritime potential.”

“Our maritime training institutions and courses have their basis in the International Convention on Standards of Training, Certification and Watchkeeping for Seafarers (STCW). We would help the Nigerian Navy obtain the STCW status for its training bodies, and facilitate the accreditation of its programmes, on purpose to advance our common goal of maritime safety and security.”

Taking cognisance of the need to maintain the International Maritime Organisation (IMO) standards, Jamoh said NIMASA would study the training curriculum of the Nigerian Navy.

He emphasised the need for training and retraining of naval personnel to improve their capability, especially, in respect of the Navy’s leading role in the Integrated National Security and Waterways Protection Infrastructure (the Deep Blue Project), which is domiciled in NIMASA.

Earlier, the FOC said the visit was in view of NIMASA’s critical role in the maintenance of standards and safety in the country’s maritime environment. He said the relationship between the Nigerian Navy and NIMASA had led to improved maritime safety and security in Nigerian waters.

Lawal commended efforts by NIMASA to ensure safety and standards in the maritime environment.

“This makes collaboration between the Command and NIMASA desirable and inevitable,” Lawal stated. “In order to achieve this objective, the Command desires further assistance and collaboration with NIMASA in the area of certification for International Convention on Standards of Training, Certification and Watchkeeping for Seafarers,” he added.

Lawal also requested Jamoh to “facilitate the accreditation of our professional courses through collaborative efforts with the Maritime Academy of Nigeria (MAN), Oron.”