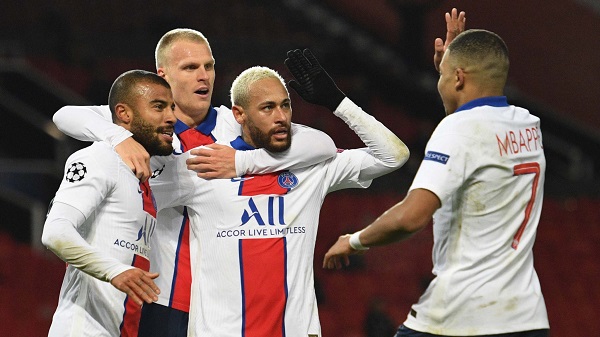 Paris Saint-Germain took a huge step towards avoiding an embarrassing early exit from the Champions League as Neymar scored twice in a 3-1 win away to Manchester United on Wednesday.

Both sides still have work to do in their final group games to reach the last 16, but it is PSG who are now in the driving seat in Group H with the French champions, United and RB Leipzig all tied on nine points.

PSG host Istanbul Basaksehir on Tuesday, while United need a point when they travel to Germany.

Ole Gunnar Solskjaer’s men were left to rue a host of huge chances early in the second half with the match poised at 1-1 after Marcus Rashford cancelled out Neymar’s early opener.

But Solskjaer’s decision not to replace Fred before he was sent off seconds after Marquinhos scored PSG’s second was a naive mistake which cost his side.

The Brazilian midfielder had twice been lucky to escape a red card before half-time.

Leipzig’s late winner in a 4-3 thrillier in Istanbul earlier on Wednesday piled the pressure on PSG to win and keep their fate in their own hands going into matchday six.

The visitors started brightly in response and went in front after just six minutes.

Neymar and Kylian Mbappe were predictably the danger men and when the latter’s deflected shot fell kindly for the Brazilian, he drilled low past David de Gea.

Fred had a first lucky escape on 24 minutes as Italian referee Daniele Orsato decided a yellow card for was sufficient for a headbutt on Leandro Paredes after reviewing the incident.

Anthony Martial’s initial effort forced Keylor Navas into his first save of the match, but from the rebound, Aaron Wan-Bissaka fed Rashford, who was credited with his third goal in four appearances against PSG despite his shot taking a huge deflection off Danilo to wrong-foot Navas.

Fortunate Fred
Fred was fortunate again moments later when he trod on Paredes, but it was the Argentine who was booked for a collision between the two.

But if PSG’s luck was out before the break, they got the let-off they needed at the start of the second period through United’s profligacy.

Martial somehow blazed over with the goal at his mercy after brilliant work from Rashford and Edinson Cavani.

Cavani is PSG’s record goalscorer after scoring 200 times in seven seasons at the Parc des Princes, but the Uruguayan was allowed to leave for free when his contract expired in June, not even hanging around as PSG reached their first ever Champions League final in August.

The 33-year-old was inches away from exacting revenge with a delicate chip over Navas that came back off the crossbar before Marquinhos’s brave block denied Martial again.

At the other end Marquinhos also hit the woodwork with a looping header.

Thomas Tuchel’s future as PSG boss would be plunged into doubt by a failure to progress from the group stage, but he made a telling contribution with a change of system to shore up his side’s susceptibility on the counter-attack as Ander Herrera and Mitchel Bakker were introduced.

De Gea produced an incredible save from Bakker low to his left, but that only delayed PSG retaking the lead by a few seconds as, from the resulting corner, the ball broke for Marquinhos to prod home from close range.

Less than a minute after the goal, United were finally down to 10 men as Fred’s luck ran out despite playing the ball before tripping Herrera.

United still came close to salvaging the point they needed to qualify as substitute Paul Pogba’s sweetly struck volley flew just over before Bruno Fernandes headed too close to Navas.

But PSG gained some measure of revenge for their stunning Champions League elimination to United in 2019 by sealing a huge win with a third in stoppage time when Neymar rolled home Rafinha’s cut-back.