Navy Hands Over 3 Barges To EFCC In Rivers State 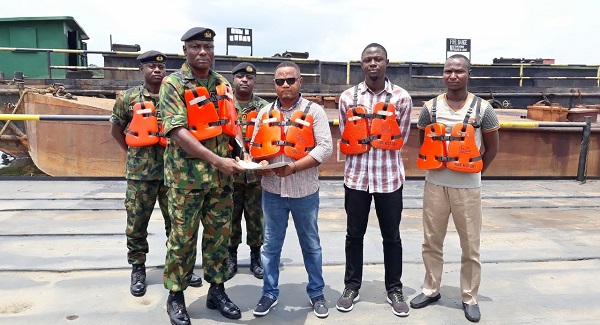 Operatives of the Nigerian Navy Ship, NNS Pathfinder have handed over three Barges, Furo 1, MV Destiny Bright and an unnamed Metal Barge to the Port Harcourt Zonal Office of the Economic and Financial Crimes Commission (EFCC), for further investigation.

This was contained in a statement by the anti graft agency yesterday.

Navy Captain A T Ebo who handed over the equipment on behalf of the Base’s commanding officer, disclosed that the vessels were intercepted and arrested during routine patrol for alleged involvement in illegal bunkering activities.

According to him, FURO 1 was intercepted on May 3, 2017 along Gbele waterways, while MV Destiny Bright and the unnamed Barge were intercepted at Adokakiri and Cawthorne Channel open waterways respectively on April 19 and 30, 2020.

They were arrested and handed over to the EFCC by the Nigerian Navy Ship, NNS Jubilee, Ikot Abasi, Akwa-Ibom state.

According to the Commanding Officer, Nigerian Navy Ship Jubilee, Commodore A. M. Ibrahim, the five suspects were arrested onboard the vessel, along Uta- Ewa Creek Ikot Abasi at about 1935hrs on Monday May 18, 2020.

The arrested vessel was laden with unspecified quantity of petroleum products suspected to be illegally refined AGO. Jubril reiterated the need to secure the Nigerian waterways against all forms of illegal activities, and promised to sustain the synergy between the Nigerian Navy and the EFCC.