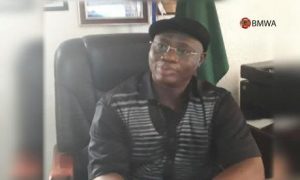 The leadership of Maritime Workers Union of Nigeria (MWUN) has commended the Nigerian Maritime Administration and Safety Agency (NIMASA) for its role in the release of five members of the union kidnapped on the waterways in Rivers State, last week.

MWUN President General, Comrade Adewale Adeyanju stated this in a press release to announce to the public the good news of the release its members who were kidnapped on the Kula Abomema waterways on their way to attend an official meeting in Port Harcourt.

“We also wish to thank all well meaning Nigerians and stakeholders for standing with us in our hour of need and pain. Equally, we deeply appreciate the critical and central role played by the Director General, NIMASA, Dr. Bashir Jamoh, for his immediate and decisive action of deploying the awesome arsenal of the deep blue project to use in securing the release of our kidnapped members as well as other Nigerians.”

Meanwhile, another press statement from NIMASA revealed that the Director General of NIMASA broke the news after a phone conversation with the President-General of the MWUN, Comrade Adewale Adeyanju at about 8:15pm on Friday.

The abductees are believed to be in good physical condition.