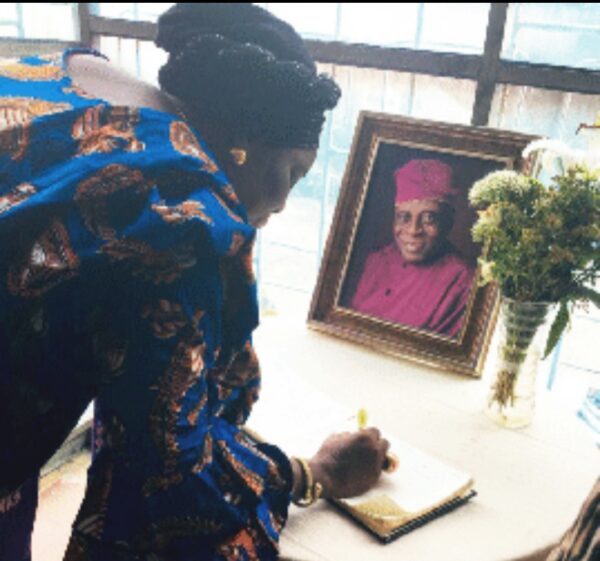 In order to keep the memory of late maritime icon, Otunba Kunle Folarin alive ,members of the Nigerian Ports Consultative Council, NPCC has concluded plans to immortalize the immediate past Chairman of the Council, who passed on recently,at the age of 81.

Speaking during the visit to the late maritime icon, Chairman, Port Operations and Logistics Committee, NPCC, Bolaji Sunmola revealed that the association is ready to immortalize Late Otunba and participate in the burial rites. Sunmola while addressing Mrs Joyce Folarin, wife of Late Otunba appealed to the family that the Council would want to be actively involved in the burial of the past chairman of the Council.

His words“ Ma and my dear sister, we wish that you give the maritime industry as championed by NPCC a role in the burial rites for this great man. He is not just your father but is a father to the maritime industry and we are looking for ways by which we can immortalize him. There is no life, he has not touched and it’s not by money but by what God has given him. His passion was for the maritime industry and he lived and died there. NPCC would not live you alone and we thank you for allowing ‘Baba’ to be with us” he said.

Sunmola noted that the late Otunba was a father figure to him.

“I lost my dad much earlier but God sent me Otunba and he was much more like a biological father to me and to the larger industry for 50 years. Late Otunba is an authority in the industry, and so it is auspicious and very normal for NPCC to be at the frontier to celebrate this wonderful man who died working for Nigeria. People on board and those yet to come would see his name in very solid gold” said Sunmola.

On his part, Major (RTD) Henry Ajetumobi, Ex- Vice Chairman, NPCC stated that the association came to celebrate with the family rather than to mourn.

“We have come to celebrate life not to mourn. We have come to identify with him, pray for him, wish him well and ensure that the legacy of Late Otunba who was our chairman and still our mentor is preserved. We are grateful that Late Otunba Olakunle Folarin did not only live well but died well. Late Otunba was an inspiration. We are here voluntarily. We are his children and we have come to condole with the family he left behind” he said

Maritime lawyer, Chief Osuala Emma Nwagbara reiterated that Late Otunba was an inspiration to the maritime industry whose work would continue to speak eternally. His words:

In her own reaction,Assistant Director, Monitoring and Enforcement, Nigerian Shippers Council (NSC), Mrs Egbosimba Ese, had this to say“I first met Late Otunba as a young girl of 26 years when I was employed in the industry, you can see that I am quite advanced now, so he consistently contributed. He was a man who emptied himself for the industry. He was passionate about one thing- the maritime industry; just as the Bible says ‘if our eyes be single our entire body would be full of light’. His eyes were for the maritime industry only and we would remember him for that. I pray for the wife to live longer to tell the great-great grandchildren about this wonderful man who made an immense contribution to his nation”.

Mrs Eunice Ezeoke, President of Women’s International Shipping and Trading Association (WISTA Nig) who earlier had visited the widow of late Otunba Folarin ,who is a patron of the association,described the news of the death of the patriarch as a huge shock.

“The sad news about Otunba Kunle Folarin came to us as a huge shock, because we never heard he was sick!

“He was an erudite scholar, researcher, and repository of maritime industry knowledge and information. Otunba mentored many and freely shared his knowledge with all that cared to acquire knowledge.

“He lived a very impactful life filled with vigor and passion for the industry he so loved. His great intellectual capacity usually demonstrated at Industry events remain unparalleled. His depth of the knowledge of the Martime Industry appeared inexhaustible. He has left a void that will be difficult to fill.

“Never one to retire to the life of leisure and sedentary, Otunba heroically remained dynamic and active to the very end!

May his soul Rest In Peace Amen” Mrs Ezeoke stated

Since the news of the demise of the late PCC chairman broke out, his home has become a mecca of sorts as friends, colleagues and sympathisers continue to throng the place.

Not left out in the sympathy visits are the leadership of Women In logistics And Transport (WILAT) who last Tuesday,led by Mrs Aisha Ali Ibrahim ,paid a condolence visit to the family of late Otunba Kunle Folarin

In the same vein,the immediate past Executive Secretary of the Nigerian Shippers Council, Barr Hassan Bello on Tuesday also paid a condolence visit to the family.

In response to the accolades showered on her late father, Olamide Adeosun,eldest daughter of late Otunba , expressed her appreciation to the members of NNPC present and revealed that the funeral plans would commence at the end of January 2023. She said: “I appreciate you all. It’s been quite overwhelming on the amount of well wishes and people that have been coming to commiserate with us and we don’t take that for granted. We didn’t realize how much of a big figure he is in the maritime industry, not just in Lagos but nationally. I think in the last week, we have come to realize that he is a father not just to us his biological children but to the maritime industry at large. We are actually happy to share him with the maritime industry. The date of his funeral has not been set yet, but it is going to be sometime towards the end of January and the maritime industry through Mr Patrick Ezedimbu would be informed and carried along accordingly”.