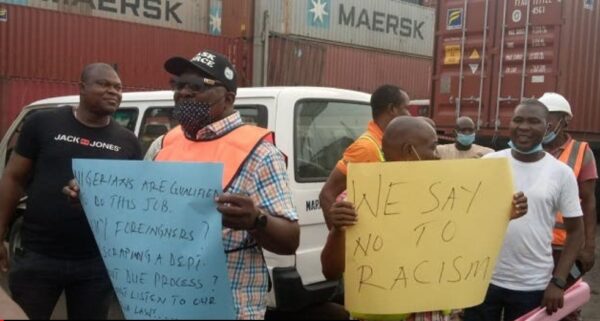 The Maritime Workers Union of Nigeria has lamented the high level of insecurity at the nation’s seaports.

Addressing journalists recently in Lagos, the President General of MWUN, Adewale Adeyanju, bemoaned the attack on one of the association’s members, Wale Cole, who is also a freight forwarder, recently.

The victim, who was left with a deep matchet cut, was said to be currently receiving treatment at an undisclosed hospital.

Speaking further, Adeyanju urged the government, through the Nigerian Ports Authority, to ensure the regulation of the activities of freight forwarders in the country.

“The government should also intensify efforts to see how they will regulate the activities of the freight forwarding associations because it is no longer the profession we know. It has changed to where one faction hires hoodlums to attack another faction and other port users.

“If the insecurity currently taking place in the port is not well managed, I don’t know where the management of NPA will find itself. This is a signal that all is not well in terms of security at the ports where the police have to run for their lives as a result of what happened on Thursday at the Tin Can Island port.”

He described the attack as barbaric and one too many for members of the union.

The MWUN boss reiterated the need for the government to fortify security around the port areas to forestall future attacks.

“Port is an exclusive zone of the Federal Government and regulated by law, which is why the government takes interest in port activities. We are not happy with this development, which is why we are suspending our services.

“We have the police and other security agencies at the ports yet hoodlums come from outside and unleash terror on our members. You see hundreds of people around the ports, who are they?

“A similar incident happened on the 26th of July when Lagos State Park Management Committee came into the port to attack us and almost four of our members lost their lives.”

Also speaking, the President Dockworkers branch of MWUN, Ibrahim Ohize, said the leadership of the union would not condone such attacks on its members anymore.

“This is the second attack on our members this year. We are using the medium to send a signal to the government that if the third attack happens, we will not hesitate to react.

“We have written a series of letters on previous attacks, but up till now, nothing has been done and another one is happening now. But we will no longer fold our hands if this continues.”

Confirming this, the acting National President of the ANLCA, Mr Kayode Farinto, admitted that they were attacked.

He said, “The impostors attacked our executives.”