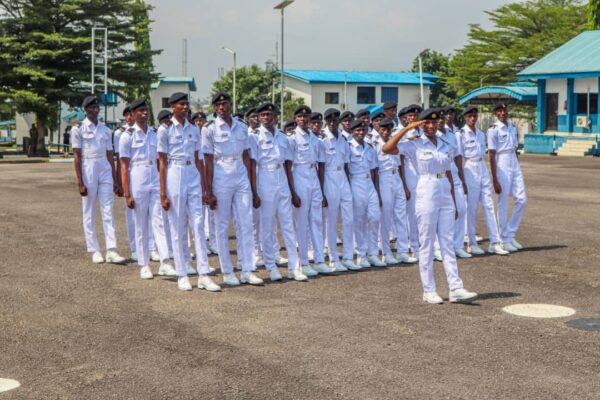 In what seems to be the best ever watched  Parade  of the nation’s premier maritime education and training centre, the Maritime Academy of Nigeria Oron, 236 Cadets who have proven themselves in character and learning, will on Thursday, December 15, pass out in a colourful ceremony that would climax their successful training and studies in the Academy for the award of Higher National Diploma,HND, and the National Diploma,ND in their various fields of learning.

The Passing-out-Parade (P.O.P.) has come to stay in the military tradition of the Academy to showcase the rich human capital base of young and promising Nigerians refined through regimental crucibles for professionalism in the maritime world.

The graduating cadets, 236 in number, are drawn from the School of Nautical Studies, School of Engineering, School of Maritime Transport  Studies.

While reviewing  the Internal Parade, the Rector Commodore Emmanuel Effedua who was represented by the Chairman, 2022 Graduation Organizing Committee and Director Specialized Seafarers Training Center, Dr. Kevin Okonna, congratulated the cadets for the character they are made of and charged them to be good ambassadors of the Academy by translating the vast knowledge they have acquired into service as they are going into the world. The Rector described the Passing-out-Parade as ” great, and indeed the best ever watched ceremony in the Academy”.

The Maritime Academy of Nigeria, Oron, was established in 1977 by the Federal Executive Conclusion No. EC172 with assistance from the International Maritime Organization, IMO. It was known at inception as Nautical College. Following the ratification of the STCW1978 Convention by Nigeria in 1986, the status of Nautical College of Nigeria was upgraded by Decree No.16 of 1988 ( now Cap 113 LFN 20), its responsibilities enlarged and name changed to Maritime Academy of Nigeria.

Speaking with our correspondent, the Chief  Cadet of 2022 graduating set, Cadet Z A Fanda, (HND, Nautical Science),  on behalf of the graduating cadets described the event as joyous and exciting to finally graduate not just as an ordinary cadet but as a Chief Cadet and as an officer. ” It is equally worth thanking God that none of my colleagues had died or has a carry over. God made it possible for all 94 of us, (a direct reference to his HND set), to graduate and would pass out successfully”.

The Chief Cadet showered praises on the Rector, CDRE Emmanuel Effedua (Rtd), for transforming the Academy into international standard judging from the serene and lush ambience, modern infrastructure, state-of-the-art equipment and highly motivated workforce which all combined to make their studies most exciting.

He expressed the hope that current efforts of the Rector to  collaborate with other maritime institutions across the globe has the international recognition of the Academy to gain traction.

Cadet Fanda however, charged his colleagues and the upcoming cadets to be dedicated and focused to achieve success, adding that ” it is rewarding to master the trade of the sea trade”, he added.

As part of events lined up for Graduation Ceremony on the 15th Dec. 2022, a Jumu’at service which held on the 9th Dec followed by christian thanksgiving service & football match on 11th Dec 2022. The Open Ship/Internal Parade took place 12th December, 2022.

Others are, Annual Maritime Lecture and Regimental/Social Day billed for 13th and 14th Dec 2022 ,respectively.