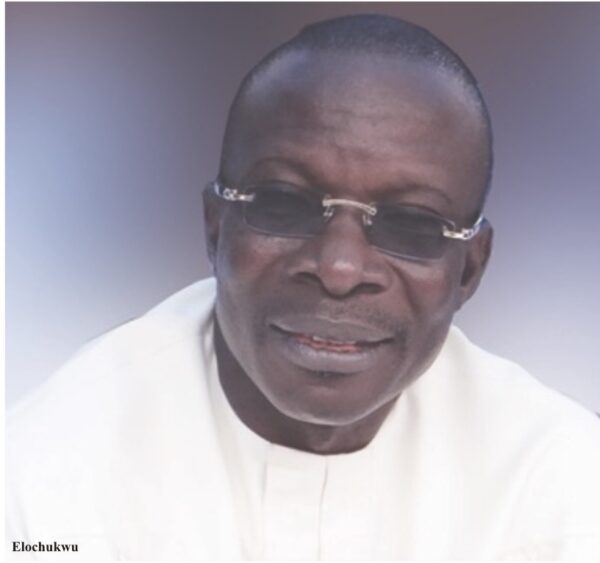 Last week, MMS Plus, brought you views from the Dr. Taiwo Afolabi -led Board of Trustees(BOT) faction of the Association of Nigerian Licensed Customs Agents (ANLCA), where the Secretary of the Association, Alhaji Babatunde Mukaila gave their own side of the disturbing story.

To balance scale of fairness, we serve you our interview with a former president of the Association, Chief (Sir) Ernest Elochukwu, GMD / CEO of Nestello Gateways Group, who incidentally gave extensive and expansive submissions about the association’s crisis, arguing that the process that led to the amendment of the ANLCA constitution and the subsequent tenure elongation was fraught with illegality. Chief Elochukwu maintains that the crisis in the association was triggered by the burning desire of the leadership to hold on to power at all cost. How much faith does he have in the CRFFN led peace committee? Is there an end to this saga? Are all the factions ready to sheath their sword. All the answers are in this interview. He spoke with Frank Odinukaeze.Enjoy it.

ANLCA, is currently engulfed in crisis that has polarized the Association into factions with each claiming legitimacy over the other. As the former president of ANLCA,how did the Association get to this situation? What are the contentious issues?

First, the contentious issues: It is about the idea of lawlessness, and disdain for doing things the right way.  In other words, disdain for constitutionality and rascality on the part of those who come, holding offices, especially in such institutions. The summation of all this is failure of leadership, in some persons who clamour for public offices. The issue started with the NECOM, led by Tony Iju Nwabunike pitching its support with a faction of BOT that was in the minority.  A situation which a BOT of eight persons and five took a decision, and rather than abide by the decision of the majority, the minority now decided to form their own clique. May be because of personality and that is where the whole thing started from.

When internal election of Board of Trustees to reconstitute its leadership happened, it was something that is usual. It is a usual thing that changes occur, as it occurred. And then the NECOM decided to rather than go on with the view of the majority, decided to go with the minority. That is the origin of the problem and ever since then, matters have gone from one indecency to another, including of course the issue of obedience to court order, the issue of abiding by the constitution, upon which they were sworn in . So, right now, when people say it’s about factions , yes may be they are right, but then it’s not the faction thing that is the main issue now. The issue is about constitutionality. For instance, is it possible  that president Muhammadu Buhari could, maybe, at this point in time, go to the National Assembly or whatever it is and purport to have  changed the constitution to elongate his tenure instead of exiting in May 29 ,2023, is it possible for Buhari to go to the National Assembly and say, no, I won’t be going again on May 29, 2023, that I have extended my term to 2024? Of course, there will be uproar. The issue now is about tenure elongation. One thing that bothered me is rather than call something the proper name it will now be couched in factions. So the question is: Whether faction or no faction, is it legal for someone or a people that have been elected under a particular term, as by the constitution ,to purport to have changed the constitution that would now elongate their stay? That’s a crucial question and that is the bone of contention now.

The claim from the other faction is that the tenure elongation was properly done at the AGM, that comprised all groups from different parts of the country, even though Mustapha and three others were not at that AGM. They hold, the outcome of the AGM subsists and is binding on those not present. What is your reaction to this?

Well, my reaction is simple: It is a fraudulent statement for anybody to say that the constitution of ANLCA, is changeable at any AGM. This is a constitutional issue. Now, the norm, the practice in ANLCA has always been that, if there is any portion of the constitution to be changed, that , even after noting all of them – because usually the constitution go through a lot of  review overtime a constitution review committee is always appointed. They are to collect views from members and chapters and in the cause of their job and then after that, make their recommendation which will now be considered in an AGM. So, a situation where an amendment of a constitution is done in that fashion is terrible. It is terrible for people to even be talking about it, that a sitting government can just get up and then decides that certain portions of the constitution should be changed. And therefore, an AGM is called and it is changed. It therefore means that another person can come and then go ahead to change the constitution. So, constitution is not only a legal frame work, but it is the solid ground on which associations or people are governed. Constitution is sacrosanct, that you don’t just get up and change it. That is the standard all over the world .So, those who are giving this idea that an AGM was called or properly called or not properly called, that is not even the issue. The issue is that the methodology of changing the constitution of an association, goes beyond just gathering people and say those in favour  say, “Ai” and those against say “Nay” No! It doesn’t work that way. So anyone trying to sell this idea of properly called AGM, is not getting it right. Besides, for the records ,at the point this so called AGM was called, a competent court had restrained Tony Iju Nwabunike and his co-travelers in the National Executive Committee (NECOM) from parading themselves as  officers of the association. So the question is:Has the law court restrained a man from acting in the capacity he acted? And then he did something and he is trying to justify his action, it can only happen in Nigeria.

Deductively, from all you have said the process leading to the amendment of the constitution and the subsequent tenure elongation were fraught with errors. Is that what you are saying?

That is it. Not just fraught with errors but illegality. When you say error, error could be a mistake, but then ,when somebody has done something that is wrong knowing that it is wrong, it is an illegality.

CRFFN has intervened in this matter, do you see anything positive coming out of this intervention?

Even the Holy Book, did say that you shall know the truth and the truth shall set you free. Now, when people know what the truth is, and say it, it becomes a start point to solution to any issue or any question. But then, it is unfortunate that we have come to this point in our national history, where truth now becomes an aberration. Nobody wants to say the truth again because it is not fashionable to say the truth, but  before people will say the truth, they will look at faces and confirm whether this truth they are going to say, how does it affect A or B? And that is why part of the problem we have on this is that those who should be analyzing things based objectively, especially the people in the fourth estate, some have jumped into the fray.

So,as a former president of ANLCA, what is the way forward?

Well, for me, if the people could come down from their high horses, those doing the wrong thing, can look back and ask themselves some vital questions, the matter would be resolved.