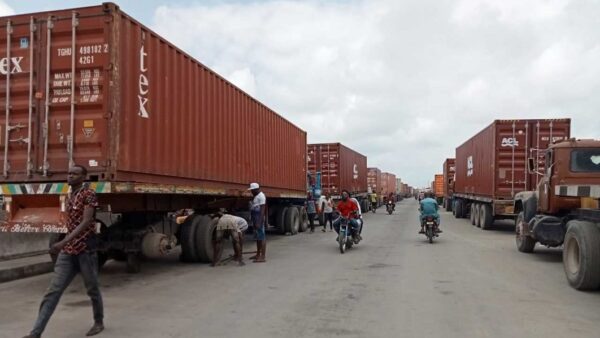 To improve cargo and haulage movement in Nigeria, there must be establishment of standard repair plants, outsourcing development of standard low-cost transit parks, and increase in warehouse and storage capacity.

Others are further expansion of the pre-gate space and equipment, creation of more holding bays in and outside Lagos, corruption-free licensing procedure and development of inland waterways through Public Private Partnership (PPP).

These were the submissions of stakeholders in the maritime transport sector at the Council of Maritime Transport Unions and Associations (COMTUA) 2022 yearly congress held in Lagos.

According to them, cargo movement and haulage business in Nigeria have been bedeviled with multiple factors, which include, inadequate and ineffective security of cargoes and its handling capacity as well as equipment/technologies, poor service delivery and cargo processing.

Others, they listed are, high costs of purchasing trucks, which have promoted the use of rickety trucks as well as absence of resting parks for haulage drivers and poor intermodal integration, especially railway transport.

A Professor of Transport and Logistics, School of Transport and Logistics, Lagos State University, (LASU), Odewumi Samuel, while presenting a paper titled: “Cargoes and Haulage Movements in Nigeria: Issues and Solutions,” said the establishment of road authority, which will aid enforcement of urban and regional planning laws, decongestion and proper maintenance culture of the roads to ease movement of cargoes, more investments, public-private partnerships and tax for infrastructure, were solutions to the problems ravaging the business in the country.

Samuel said these have affected the country’s ease of doing business index, as the country still suffers from massive corruption and a debilitating lack of infrastructure thereby making doing business difficult and placing Nigeria’s position at 131 out of 190 countries.

He said economies ranking from one to 20 have simpler and friendlier regulations for businesses, noting that in Africa, the best country for doing business is Mauritius, which ranks among the first countries worldwide.

Samuel said for Nigeria to achieve its goal of becoming 70th position on the ease of doing business ranking by 2023, it must improve its economic environment, which requires minimising imported goods, government encouragement of exportation, agricultural exploits for food security, small scale business financial and technical support, manufacturing sector and human capacity development as well as Information and Communication Technology (ICT) integration in all sectors.

He called for technology solutions to improve last mile logistics, such as location-based crowd-sourcing/outsourcing of deliveries through digital platforms along with the ongoing integration and enhancement of automation across industries as well as delivery robots, drones and self-driving vehicles making many of these drop-offs in the not-so-far future.

Samuel also called for professionalisation of the transport-coordinating ministry, signing into law, states and Federal Government’s transport policies, involvement of citizens, unions and organisation in road/rail/water ways maintenance and monitoring.

Other solutions proffered include, enforcement of Delivery Vehicle Standards, especially tankers and trailers for dry and wet cargo as well as speedy completion of construction sites, which has taken more than 10 years, thereby prolonging the agony of freight movement.

Also speaking, the Governor of Lagos State, Babajide Sanwo-Olu, who was represented by the General Manager, Lagos State Waterways Authority (LASWA), Damilola Emmanuel, stressed the importance of technology in the development of haulage, logistics and transport sector at large.

He also noted that LASWA and the French Development Agency (AFD) are developing together a new project called “Waterways Investment and Development of the Environment in Lagos State” (WIDE-LAG) to meet the structural challenges of overwhelming informal operators, lack of critical infrastructures and limited vessel capacities among others.

He said the project preparatory studies are being financed by a 1.2million EUR grant from AFD, while the scope includes the development of five to eight priority ferry routes providing facilities such as ferry terminals, pontoons, shipyard for vessel maintenance and dredging of critical areas.

On his part, the Special Adviser to the Governor of Lagos State on Transportation, Sola Giwa disclosed that the state government has approved COMTUA as the umbrella body to regulate truck members.

Giwa, who was represented by the Assistant Director, Transport Operations, Ministry of Transportation, Olasunkanmi Morenikeji Ojowuro, called on COMTUA executives to bring every association and union in maritime transport together to speak with one voice to achieve greatness.

Speaking earlier, the National President, COMTUA, Adeyinka Aroyewun, said the council is an umbrella body of all unions and associations operating in the maritime transport sector, adding that the collaboration was borne out of many difficulties facing the smooth operation of maritime transport in the country.

He said the earlier collaborations like Joint Action Committee (JAC), jacoto J-cost and Amalgamation could not solve all the problems due to the diversity in leadership philosophy, hence, the need to build a wider and formidable collaboration like COMTUA.

Previous ‘Integration of Lekki port with LFZ will unlock economic fortunes’
Next Non-oil export proceeds up by $1.79b as CBN pays N81b rebate