Nze Aloy Igwe is the Chairman of Association of Nigerian Licensed Customs Agents (ANLCA), Murtala Mohammed International Airport, Ikeja, Lagos Chapter. In this interview with Segun Oladipupo, he bared his mind on the recent boycott order issued by his association as well as some other associations to their members against the National Aviation Handling Company (NAHCO) terminal, the challenges of the Aviation industry in Nigeria and his expectation of the new government of President Muhammadu Buhari among others. Excerpt;

Recently, the story that emanated from the Airport particularly from the National Aviation handling Company (NAHCO) terminal was not too good with some associations ordering their members to boycott the terminal following the terminal’s increment by 30% of their terminal charges. Were you aware of this development?

Then, could you let us into what the problem was?

Well, it is not a matter of one week; I think it started about three months ago when NAHCO came up with this issue of price adjustment, giving a lot of instances of difficulties in running cost and in the maintenance of their facilities. Then they came up with almost 70% increment and we said it was untenable, it was not something that could be discussed now. Then we didn’t take them serious because we looked at the present realities of the Nigerian economy as it is now, somebody thinking of any price adjustment. So, we thought that they were joking until sometime recently, one day we came to work and saw that there is hemming in the their price regulating system, it was adjusted to 30% and they said the commencement was immediate and we said no, this cannot be.

Until, recently, we decided to called members off because we have not seen a situation where somebody will overnight come up with price adjustment without giving time. We called our members off saying that we will not pay that and this took us almost one week within which we were not working and within then, dialogue set in. So, I can be bold to tell you now that the matter is resolved though with some pinch of salt because this is a country where things are not done at the right time. The economic realities of this time are affecting everybody, we are aware that it is affecting the ground handling companies, the importers, the airlines and even the clearing agents.

So, somebody would have thought that everybody would have relaxed until the economy begins to pick up but when they think that they are grounding down and equally they are from the stock exchange, you know NAHCO is quoted on the stock exchange, the shareholders are complaining, they are not breaking even, the Management and the Board are on the verge of being sacked. The problem was to my own understanding, the problem was so much on them that was why they felt, the reason they gave recently, if nothing was done urgently that it may result to the closing of the company.
As stakeholders and partners in progress, we reviewed the whole issues and reasoned that closing down might not be in the interest of everybody, government will lose revenue, we the agents will be thrown out of job here and NAHCO at the same time will be affected, we have no other choice than to reason and resolve it.

From your statements, it seems the problem has  been  resolved. Is there not supposed to be a regulatory body that the terminal’s management should make recourse to before the increment is effected. Does it mean that consultations were not made and approval of the relevant agency sought before the increment?

What I can tell you is that some time ago, about two months ago precisely, there was this cargo summit they held at Sheraton Hotels where various issues among which is this price adjustment were discussed but it was not adopted, people just looked at the condition of the economy and felt  it is inappropriate for now to start thinking of adjustment in prices and it was then that we started receiving the signals that there is an intention to increase or make some kinds of adjustment and after that, the stakeholders, those airlines, the associations signed the communique out of that and I think it is that communique that they later used to feel that the issue was discussed at that summit and that was what informed them to start calling for the adjustment.

Was there at any time your association discussed this issue with the NAHCO Management?

Yes, I did mention that the case started with 70% and as it was progressing, we were discussing. The only thing was that they woke up one morning and effected the increment; it was like a forced adjustment, you must pay 30% that was when we asked our members to keep off work that nobody will pay that until it got the level it was agreed at 20%.

I would rather put it that it is rather unfortunate that the misconception in our own side is that agents are trouble makers. This to us is a total misconception because we operate like a union and we are just like a pressure group. We are the voice of the masses. So, most of these agitation were often borne out of the fact that we are defending the interest of the masses.

You can imagine like now with NAHCO coming up with an increment of about 70%, we just keep quiet and swallow it hook, line and sinker and customers start paying that money, this will be transferred to the cost of the goods, which will eventually get to the market where all of us will eventually buy it.
So, you see why at times when we protest, it will be seen that these are trouble makers without taking into consideration that we are fighting for the interest of the masses. So, it is not that we like troubles or that we like making troubles, it is like we are talking, we are protecting the interest of the government in the society.

What is the way out of this constant problem?

As long as government, individuals and terminals continue creating policies that are not human-friendly, as long as these things keep on coming, we as agents, we will keep on challenging them because that is the voice of the common man. So, I don’t see the end, the end will only come when government starts issuing policies that have human face.

Earlier, you said that the problem between your association and NAHCO has been resolved; could you let us into what you both resolved that made you resume operations at the terminal?

You know, in situations like this you need to shift ground. Initially, we were very emphatic that nobody will pay that and this dragged for more than close to a month or two months until when they came from 70% to 50% then to 30% and for equity’s sake, if we keep on saying no, we can’t accept anything, so, we were looking at what if this people close up? It will be disastrous. So the best thing is that in the interest of labour relationship, let us shift ground. That was why we resolved at 20% for now.

What do you consider the challenges of the aviation industry generally in Nigeria today?

It is a general challenge which is everywhere now in the economy, although we all have to know that  had to do with the time that we are in, which basically by all intent and purposes, we expect the economy to pick when the Dollar depreciates to the advantage of the Naira. That is the general one everybody is experiencing.

Secondly, the Airport is always taken as a port. In advanced countries, governments don’t use the Airport for revenue generation, airport is treated as a transit point where most of the things are emergency but here, revenue targets are given to the airports, that makes the clearing procedure very cumbersome because every company would like to get the target not minding the concept of airport operation. So, this is a hindrance, I think the government agencies should note this, you don’t need to give airport operators target.

And the issue of PAAR (Pre-Arrival Assessment Report) too, when you subject any good coming to the country to PAAR documentation, it affects airport operations because most of the goods there are all emergency cargoes, you discover that you can through a phone call buy goods and in the next 24 hours it is coming down with a plane, how do you subject such goods into documentation? So, these are some of the hindrances we have here but lucky enough, we are weathering through all of them, we are really doing that.

Well, the question of the influx of touts into the cargo terminals should be directed to FAAN (Federal Airports Authority of Nigeria) because FAAN is the custodian of the airports and the influx of security in terms of gate men at the entrance of the terminals and cargo warehouses. It has been affecting my membership, the ANLCA members but our Biometric ID Card project is ongoing unlike in the past when ID Card was given anyhow. Now, we are now issuing our members with a Biometric ID Card where our members are now documented so that by the end of the exercise, we will now be able to know this is the number of agents operating at the Airports, we know them by companies, this is the number of agents working at a particular company and these are the numbers.

So, if you are getting inside, there you will be able to show identification and this time it is Biometric powered. This is what we are doing to complement what FAAN is doing there.

What is your expectation from the newly inaugurated government of President Muhammadu Buhari?

Well, everybody is optimistic; every government comes in with a lot of expectations. This one, there are high hopes considering the level of the person, the character that has been sworn in. When you have a disciplined leader, you expect every other thing to fall in place. 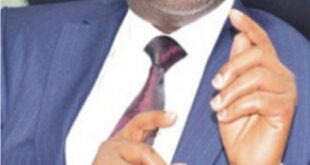