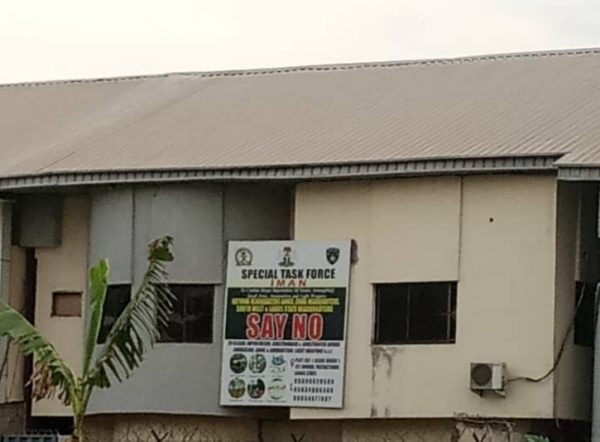 · Senate plans to strip port agencies of powers for IMAN

Importers Association of Nigeria(IMAN) Special Taskforce and the office of the Deputy Inspector General of Police (DIG) Criminal Investigation Department(CID) Force headquarters, Abuja have  embarked on an aggressive fleecing of a select Nigerian importers and big time freight agents over allegations of economic sabotage  for various imported goods  released from the ports by the Nigeria Customs Service(NCS) officials and other security agencies.

Over 100 companies have been profiled as economic saboteurs since 2021 by this taskforce and some purported  Force police headquarters officials but surprisingly  investigation by MMS Plus revealed that  they  conduct random raid on these companies in Lagos occasionally and arrest their workers without search warrant  or court order with the intention of intimidating and harassing their principals to cough out money.

Our findings reveal that they extort as much as between N20million  and N100million  from the companies that are never prosecuted  for the alleged crime.

MMS Plus recently sighted  an orchestrated  group  petition signed by one Obinna who is a representative of  the IMAN Taskforce which has its office at 12 road Junction, First Avenue, Festac Town, Lagos.

They have a detachment of armed police officials at the office with the picture frame of a former police DIG in uniform, whom they refer to as their “Oga” who liaises with the serving  Inspector General of Police(IGP) and the DIG in charge of CID Force headquarters for their backing and operation.

They deploy the services of various police Area Commands, special units in Lagos and F CID, Alagbon in particular to ply their trade as they lock up their prey for days and mount pressure on the company to succumb to their blackmail.

Their general  petition which they prefer to only read to their victims as they raid the offices alleges, under declaration, concealment, tax evasion, importation of substandard products, non-registration of products, underpayment of import duty , among others.

They run a one-stop  inter-agency crime detection  and settlement system in which they undertake the function of Customs officers on duty assessment and valuation with  acceptance of cash only without a remita account; carry out the duties of Standard Organization of Nigeria(SON) on quality of import and the company audit of the companies for the Federal Inland Revenue Service(FIRS).

They don’t accept bank transaction irrespective of the amount but cash payment at locations chosen for the payment.

MMS Plus did an undercover investigation in one of the raid incidents during which members of the taskforce demanded N50million to release a fourty feet container of tyres they had seized from one of their victims’ warehouses.  A member of the group, Obinna in company of some police men from Abuja, admitted that Don Climax Bonded Terminal in particular had  earlier that day succumbed to the payment of N40million to reclaim their seized containers.

Disturbed at the trend of blackmail, MMS Plus asked why the agencies of the government like NCS, SON, FIRS, among others, whose duties they usurp  at the office are not officially posted to the centre if their operation is genuine, but they claimed  ignorantly at first instance that they were empowered to run their show by the Act establishing the National  Centre for the Co-ordination and Control  of the Proliferation  of Small Arms and Light Weapons in Nigeria and other related matters.

However, our reporter was quick to remind them that the bill is still being debated and could not have become an Act overnight.

Our findings show that the blackmail has assumed another dimension now  with the initiation of some SON officials, Area E Festac police into the syndicate as they raided a Kamange Nigeria warehouse, made away again with choice vehicle tyres, beat up the Warehouse Manager, arrested him and consequently detained him for three days at the Festac police facility on allegation of economic sabotage allegedly perpetrated by the foreign company, which has become a meal ticket for them for more than two years running.

The raid and arrest, carried out two week  ago was led by one police officer, Nmomah Francis who  claimed to have been sent on the operation by the DIG Force CID, Abuja  in accompany of some IMAN Taskforce members.  As always and as expected, they used the Manager arrested and detained as a bait for negotiation.

Contacted, the Area Commander of Area E, Festac Town, Lagos, Assistant  Commissioner of Police(ACP), Igbafe Afegbai acknowledged that the team on rampage came from Force CID Abuja.” It is not my case, they are from Force CID Abuja and I don’t have any business with that but the boy is in our facility, in Festac.” He said.  They bail was negotiated and they smiled to the bank as usual.

Meanwhile, when our reporter informed Afegbai that the escapades of the IMAN Taskforce and their police accomplice  is in the public domain, he became speechless, and retorted a jittery  response to the  threat of litigation on the strength of the successive blackmails and intimidations without prosecution.

Meanwhile, observers still can’t come to terms with the idea of creating an omnibus and hydra-headed body that seeks to usurp the powers of all the agencies at the port, in the name of fighting corruption and arms proliferation.

Findings showed that the primary duties of IMAN Special Taskforce being considered for legislation at the National Assembly is to fish out illegal importers who indulge in all manner of illegalities including smuggling and importation of sub-standard goods through unauthorized routes and under-declaration; falsification of documents to avoid payment of the right import duties.

The illegalities, they claim, are adversely affecting genuine importers who are perfecting genuine transactions.  It is therefore necessary that the taskforce is supported by armed police personnel during their 24 hours operations to reinforce IMAN responsibilities and obligations to all members and the country as per enclosed documents for your kind perusal.

However, while these powers are yet to be granted members of the group are said to have turned themselves to blackmail kings, abetting and aiding crimes with gross infringement on people’s rights. What becomes of the business environment if the bill scales through? A senior customs officer, who condemned their activities asked.