The pump price of Premium Motor Spirit, popularly called petrol, may rise from the current N162-N165/litre to N170/litre, while its depot price is projected to increase from N159/litre to N165/litre, oil marketers said on Thursday.

They also complained of PMS supply problems, stressing that many tank farms or depots had no petrol, which was why the few ones that had the commodity had to increase its price from the approved N148/litre price to N159/litre.

But the Nigerian National Petroleum Company Limited maintained its stance that it had enough petrol to last the country all through the festive season and beyond.

IPMAN and PETROAN members own bulk of the filling stations across the country and make purchases from depots before selling to final consumers at their various retail outlets.

Providing explanations for the rising cost of petrol at depots, owners of the facilities told our correspondent that it was because the recent agreement reached by key stakeholders in the downstream oil sector had yet to be effected by the Federal Government.

The NNPC had last week agreed to revert to naira-denominated invoices for excess capacity for coastal movement using the Investors and Exporters window rate for the time being, but this had yet to be implemented.

Depot owners had argued that the payment of the charges in dollars was a major hindrance to their effective participation in products distribution, saying this had led to scarcity in many cities.

On the possibility of a hike in the pump price of petrol soon, the National Public Relations Officer, IPMAN, Chief Ukadike Chinedu, said it was inevitable if the current increase in depot price persists.

Asked if the high depot cost could result in an increase in pump price, he replied, “Yes, because if you look at our profit margin, you will realise that it is regulated and fixed.

“And they (government) often talk about deregulation. But you cannot do deregulation in a regulated market. There is a band and you say you are doing deregulation.

“So for marketers, any moment from now, we will be pushed to take the band above N165 to N170 if this situation continues.”

Chinedu further argued that there had been problems with product availability, contrary to the position of the NNPC that it had enough petrol that would last for months.

The IPMAN spokesperson said, “I want you to know that the availability of petrol is a problem. Most tank farms don’t have products. And the place to go and buy product is from the few ones that have.

“And as a result, profiteering will set in and they will be selling at N159 to N160/litre. You (marketers) will now consider moving the product to your filling stations, particularly for marketers who don’t get bridging claims.

“Now this marketer will pay close to N100,000 to be able to send the product to his station. Now when the product gets to his station, that product’s cost is almost at N163/litre. So, will he use only N2 margin to sell petrol, knowing that he will pay staff, power bill, taxes, etc?”

Chinedu added, “Marketers should not be held responsible when the pump price increases. Many tank farms don’t have products. So marketers don’t have any option because if they buy, they sell.

“If there is surplus you will see marketers selling at N162/litre or below, but right now you hardly find anyone selling at that price. I also want to let you know that by next week, products will be close to N165/litre at depots.”

The President PETROAN, Billy Gillis-Harry, confirmed the position of IPMAN, noting that retailers of petrol at filling stations would adjust their prices upwards beyond the N165/litre if depots continued to sell at unapproved rates.

He said, “Private depot owners have increased their prices arbitrarily by themselves. Most retail outlets are very disciplined now by keeping the pump price within the band.

“But if the depots keep maintaining the N157 to N159/litre as they are doing, there will be no choice for retail outlet owners but to also add the commensurate price to it. That’s the reality.”

Gillis-Harry, however, stated that PETROAN had reported officially to the defunct Department of Petroleum Resources, which had now metamorphosed into two agencies based on the implementation of the Petroleum Industry Act.

“We will be having meeting with the new midstream and downstream regulator soon and this will be one of the issues that will come up when we meet,” the PETROAN president stated.

On why depot owners had raised their pride beyond the approved N148/litre price, an official of the Depot and Petroleum Products Marketers Association of Nigeria told our correspondent that the NNPC had failed to implement an agreement that was reached by stakeholders last week.

The official said NNPC had agreed to revert to naira-denominated invoices for excess capacity for coastal movement using import and export window rate for the time being.

The source further explained that the dollar charges on port dues of fuel vessels by the Nigerian Maritime Administration and Safety Agency and the Nigerian Ports Authority had been a challenge to depot owners.

The official stressed that the insistence of the agencies was despite a presidential directive that had ordered both organisations to stop doing so.

According to the source, the NNPC is now charging in dollars for the use of its vessels contrary to the naira charges previously done.

He stressed that the cost was now huge on depot owners, as this was the basic reason for the hike in depot price to N159/litre.

The Group General Manager, Group Public Affairs Division, NNPC, Garba-Deen Muhammad, could not be reached for comment, as he did not answer calls to his phone.

He had yet to respond to a WhatsApp message sent to him on the matter at the time of filing this report.

However, Muhammad had said in a statement issued recently that the NNPC had over 1.7 billion litres of petrol in stock and more product was expected to arrive Nigeria daily over the coming weeks and months.

He said it was unnecessary to entertain any fear of scarcity of petrol throughout the festive season and beyond.

He also stressed that NNPC was also not aware of any plan by government to cause an increase in the pump price of petroleum. 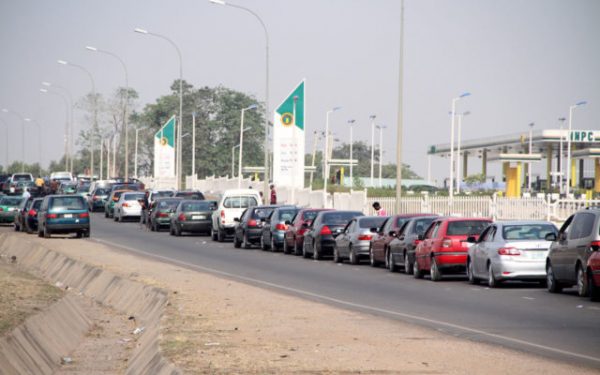