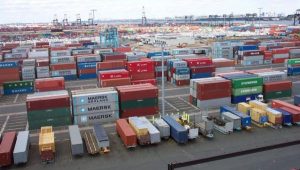 Freight agents practicing at the Apapa seaport have lamented the loss of several cargoes to theft orchestrated by security agencies during the process of examining their containers at the port.

The National Coordinator, NAGAFF 100% Compliance Team, Alhaji Ibrahim Tanko made this accusation during a security meeting with Apapa port stakeholders at the Customs Area Controller’s office on Tuesday in Apapa, Lagos.

Speaking with the press on the outcome of the security meeting, Tanko disclosed that the freight agents have lost numerous items under the guise of sampling which sees security agents go home with samples after examination.

“We are losing a lot of money as a result of sampling. Most of the security agencies, such as: Nigeria Customs Service (NCS), National Drug Law Enforcement Agency (NDLEA), Department of State Service (DSS), Labour unions, among others take samples when it is the duty of the National Agency for Food Drug Administration and Control (NAFDAC) and Standards Organization of Nigeria (SON) that officially has the right to take sample items after which they are returned to the owners. There are procedures for sampling, but this is what we are suffering here”, Tanko said.

Alhaji Tanko also stated that there have been numerous occasions where the containers seized by Customs, kept at designated area were broken by these wharf rats who cart away with the cargoes, especially Tramadol.

The NAGAFF Compliance Team Coordinator who was the convener of the meeting, described the nefarious activities as an organized crime, and called for drastic steps to be taken to flush out the miscreants from the port.

He also harped on the need to reduce crowd at the examination bay, saying that “We observed that about 50 – 60 people sleep in APMT platform. One day a freight forwarder was traced from the platform to his house and in the process the police investigation showed the suspect was one of those who sleep on that platform. The APM Terminal is neither a place for sleeping nor a football field. Those doing that should stop it”

“Everybody has a role to play, the Nigeria Police, Nigeria Customs Service, NPA, DSS and others. APM Terminal is not the owners of the port, rather they are partners. Since the platform housing Customs offices now belong to Customs as I am made to understand, Customs should take charge.”

Reacting on the security situation at the port, the Customs Area Controller, Apapa Command, Comptroller Yusuf Malanta commended the Convener of the meeting, Alhaji Tanko for his concerns and initiative, noting that the Command had taken steps to address the issue.

Comptroller Malanta stated that his Command had already taken steps to reduce the crowd by introducing Customs permit tags for Customs examination officers, adding that that Customs officers who are to conduct examinations of containers cannot access the bay without the tag which has the officer’s picture and name.

Speaking further, he noted that the Service has also created tags for freight agents, whose consignments had been positioned for examination, adding that enforcement officers are also assigned to secure the platform.