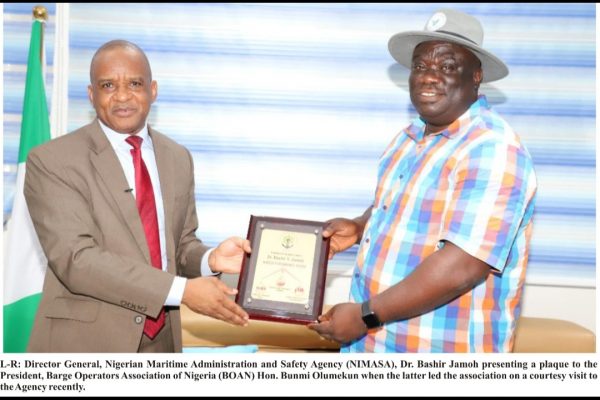 ·  How NIMASA could have impounded vessel – Warredi

Two months after the tragic explosion of the Floating Production, Storage and Offloading (FPSO) vessel, named Trinity Spirit, claimed nine lives, a public hearing by the National Assembly has revealed that inter-agency rift between Nigerian Maritime Administration and Safety Agency (NIMASA) and the Department of Petroleum Resources (DPR) allowed the FPSO to operate illegally for over five years.

While the legislators accused NIMASA of allowing the FPSO to operate in Nigeria since 2013 without Protection and Indemnity (P&I), the Head of Maritime Safety and Seafarers’ Standards department at NIMASA, Engr. Olu Aladenusi confirmed that the agency had directed the vessel to stop operations in 2017.

Engr. Aladenusi also told the legislators that NIMASA has been engaged in a rift with DPR now the Nigerian Upstream Petroleum Regulatory Commission (NUPRC) as the upstream oil regulatory agency refuses to share its list of FPSO facilities in Nigeria with NIMASA.

Although Aladenusi pleaded with the legislators to wade in by creating a framework for a genuine and sincere collaboration between NIMASA and NUPRC to attain effective control of the FPSOs operating on Nigerian waters; the reality is that NIMASA has been groping in the dark without concise knowledge of FPSOs operations in the country.

“DPR has the full list of FPSO operators in Nigeria but they don’t share with us. A strong Committee by the House should be set-up between NIMASA, NUPRC and other stakeholders where each organization would present their statutory responsibilities on offshore platforms to enable us identify areas of overlapping functions and come up with Standard Operating Procedures (SOPs) to guide all parties,” he said.

Going by this report, experts have expressed fears that there could be similar FPSO facilities around the country operating without NIMASA’s approval or with the agency completely oblivious of their illegal operations.

When queried on NIMASA’s inability to stop Trinity Spirit’s operations, Aladenusi said; “It was being husbanded by DPR and it offloaded and exported crude oil in 2021. It’s not my duty at NIMASA to supervise the exportation of crude oil. It’s NIMASA’s responsibility to arrest an unregistered ship but in this case the FPSO was floating at a permanent place. I cannot arrest a floating facility. It wasn’t moving and I can’t arrest a vessel in a permanent position.”

Speaking with MMS Plus, a former Director of Shipping Development, NIMASA, Capt. Enisuoh Warredi argued that an FPSO is a converted oil tanker and its operations are fully regulated by NIMASA.

“Was it not ships that visited the FPSO to load the crude extracted? If NIMASA has blocked ships from going to load the FPSO wouldn’t they have technically stopped the operations? If we say the FPSO isn’t a ship because it isn’t moving, but ships move there to load. Why didn’t we block those ships? Where is the evidence that NIMASA called the International Oil Companies (IOCs) for a meeting on the concerns about the FPSO’s operation?” Warredi said.

He further stressed that an FPSO is a tanker floating in one particular location for the purpose of storing oil and it’s treated as a port facility because ships come to offload the facility, adding that DPR’s role is only to inspect the cargo which is the oil.

“The structure of FPSO business and the logistics is under NIMASA. In my opinion, people at NIMASA allowed the regulations to slip into the hands of DPR or looked away for their personal interests. The FPSO is a ship and NIMASA certifies the crew onboard and gives the FPSO a certificate to operate. NIMASA is directly involved by regulation because it ensures that the crews who work onboard the FPSO are qualified and possess necessary certifications. Given these layers of interest for NIMASA on an FPSO, how come it left these responsibilities for DPR? Unless the NIMASA operatives are gaining something from the leeway, I don’t see why they should allow the facility freedom.”

Noting that FPSO Trinity Spirit’s class had expired and there was no P&I for the vessel, he posited that all operations by the vessel under such conditions were illegal.

“You can’t have P&I if your classification has expired. Once a classification society, whether it is ABS, Lloyds, among others, once it expires there is no way you can go ahead with your business. The fact that the vessel continued operations over the years showed that the regulators for the maritime sector as well as those in charge of the cargoes aren’t qualified to be there. Without insurance, who compensates the families of the workers? There is no compensation under such circumstances,” he added.

Meanwhile, three persons who were survivors of the vessel’s explosion were arraigned in court on three charges bothering on murder, arson, malicious damage and destruction of property through illegal bunkering activities.

The suspects including Anthony Nwuba, Orofin Pius Yomi and Patrick Aganyebi were charged by the police for the murder of nine persons by setting them ablaze through illegal bunkering activities in the vessel and thereby committed an offence contrary to section 316 (9) of the criminal code.

The suspects who were staff of Shebah Exploration & Production Company Ltd were also charged with causing an explosion that set ablaze Sheba Company vessel valued at N41.6 billion through illegal bunkering activities contrary to section 443 (b)of the state criminal code.

However, counsel to the suspects, Dr. Benson Enikuomehin said it was callous on the part of the Police to charge workers of the company for murder when indeed they escaped death by the whiskers when the vessel they were working with exploded on the sea.

The explosion had occurred at the Trinity Spirit floating production, storage, and offloading (FPSO) vessel which belongs to Shebah Exploration & Production Company Ltd (SEPCOL), a producer from OML 108 covering 750 square km (290 square miles) off the waters of the Niger Delta in Ondo State.

A total of nine persons were said to have died in the explosion, but not all the bodies have been recovered, while 60, 000 barrels of oil spilled from the vessel were destroyed.

In another development, the Ship Owners Association of Nigeria (SOAN) has called on the Accountant-General of the Federation, Mr. Ahmed Idris, to direct a forensic audit on the Cabotage Vessel Finance Fund (CVFF).

The President of SOAN, Dr. Mkgeorge Onyung made this call during an exclusive chat with MMS Plus, even as he lamented the uncertainty surrounding the content of CVFF and its total earnings since it was introduced in 2003 to address the lack of capacity among indigenous ship owners in Nigeria.

“If, for any reason, the fund has been tampered with; it is the constitutional right of ship owners that the federal government returns the money. The money has to be used for the purpose it was created. If that’s not the case, there is no need to continue contributing to the fund because it would amount to dumping monies there.”

Noting that NCDMB has disbursed over $500million and has generated over $750million in the NCI Fund which started in 2010, he lamented that CVFF which started eight years before NCI has benefitted no one even as the present amount in the purse speculated to be about $250million.

NCDMB takes only 1% of the contracts in the oil and gas industry for NCI while NIMASA collects 3% from imports including petroleum imports, LNG and every ship operation. Indigenous operators pay 2% and this has been running for 18years with the CVFF.

“It is sad that no one has accessed or seen this CVFF. We are the benefactors of that money. We are the contributors like an ‘esusu’ or ‘ajo’. Someone who didn’t contribute to the fund should be allowed to access the fund. NIMASA also has the mandate to use 25 percent of its revenue to support shipping. It is high time we ask where they have delivered that support. These are questions that are begging for answers,” he added.