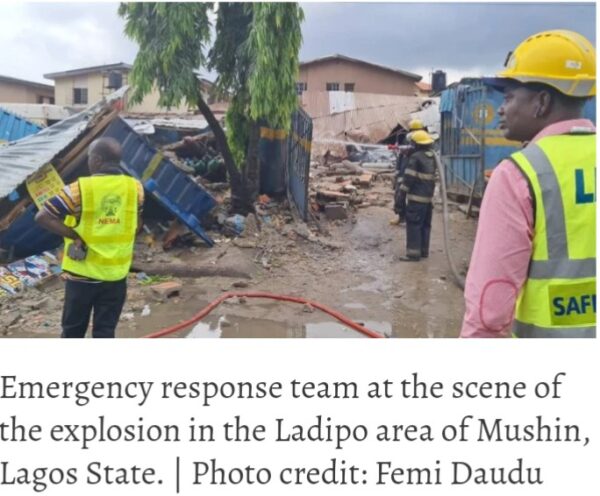 A gas explosion occurred on Tuesday morning on Ojekunle Street in the Ladipo area of Mushin in Lagos State.

Media learnt that the explosion happened around 8am.

An official of the Lagos State Emergency Management Agency confirmed the incident to media.

According to the official, first responders have been deployed to the site of the explosion.

Ladipo explosion: Five confirmed killed
The Director-General of the Lagos State Safety Commission, Lanre Mojola, confirmed to media at the scene that five lives were lost as a result of the explosion.

He, however, declined comments on the number of injured persons.

According to him, they include four male adults and one female adult.

Our correspondent at the scene observed that their bodies were bagged and handed over to their families immediately.

The Director, Lagos State Fire and Rescue Service, Margaret Adeseye had in an ‘Emergency Alert’ stated that those that died in the explosion were three males.

She wrote, “The Lagos State Fire and Rescue Service is currently attending to a Gas Explosion at 21, Ojekunle Street, Ladipo, Mushin Lagos.

“The Gas incident which was reported at 08:42 hours Tuesday morning via the State emergency reporting platform was swiftly responded to by a combination of the State first and secondary responders.

“On arrival at the scene, it was discovered that it is an open space used for several activities including a beer parlour, mechanic workshop, spare parts sale and gas shop amongst others while housing a makeshift structure.

“Three male adults had been recovered as rescue and recovery operations continue in an environment isolated from causing any further secondary incident.

“Preliminary investigations to establish the fact of the incident continue and further discovery will be made public.”