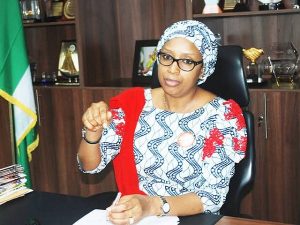 Following the suspension of Ms. Hadiza Bala-Usman as Managing Director of Nigerian Ports Authority (NPA), a former NPA Board member Senator Binta Masi Garba yesterday posited that she was removed for raising observations over the agency’s financial records.

According to Binta, who made her position known in a statement yesterday, her observations did not go down well with the suspended NPA Managing Director, Hadiza and she alleged that Ms. Bala-Usman decided her removal from the board without the knowledge or recommendation of the Minister of Transportation, Rotimi Amaechi.

Hadiza, however, in a response obtained by our correspondent, queried the Senator for not registering her reservations reservations complaints when the auditors presented the financial statement to the finance committee which she was a member.

The Senator said she met a senior official in the Presidential Villa and advised that the suspended Managing Director be called to order.

She said: “I was appointed into the board of the NPA sometime in March 2020. In January 2021, Sen. John Akpanudoedehe and I were removed from the board and our removal was clearly orchestrated by the now suspended Managing Director (MD) of NPA, Hadiza Bala Usman.

“Note, I was removed without the knowledge of the supervising ministry/minister of Transportation, which was very uncommon. My observations and complaints with the suspended NPA MD were more with the financial statements of NPA and I worried that if she continued so, there would certainly be trouble and her sudden removal (suspension) would be inevitable.

”I noted discrepancies, I raised observations, I asked questions, but I was completely ignored and disregarded. Answers were never provided, until my removal was plotted.”

Hadiza, in her response today said; “Did she seek clarifications on areas that seemed opaqued or suspicious? If she did what happened? If she was not satisfied with the answers provided by the auditors, why did she not consider withholding assent to the statement? Why did she not formally document her discontent? Why did she not issue a minority opinion on the statement, instead of now speaking after the fact?”

“While I concede to Senator Binta Garba’s right to whatever opinion she desires concerning our relationship when she was a board member, I remind her that those who allow themselves to be used to malign innocent people have their own days of reckoning.”

The suspended NPA boss also argued that the Authority has since 2016, openly exhibited its readiness to be held to public scrutiny by taking the following steps: “Signing of a Memorandum of Understanding with BUdgit Open Budget System Platform and Implementation of a Public Data Dissemination programme, publishing the tariff regime of the Authority on the website for the whole world to see in line with the vision of transparency and accountability.”