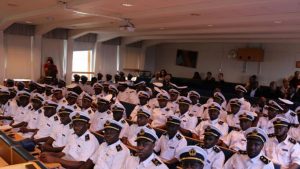 The Federal Government has expressed commitment to develop better living conditions as a minimum benchmark for seafarers in Nigeria as part of efforts to support their efforts in global trade.

Nigeria’s Minister of Transportation, Hon. Rotimi Amaechi revealed this in his speech during an event by Nigerian Maritime Administration and Safety Agency (NIMASA) to mark the world seafarers’ Day in Lagos.

Amaechi, who joined the meeting online, said that the government could provide minimum best living conditions for seafarers in a bid to show support for their commendable work.

While he encouraged NIMASA to explore strategies to make the initiative a reality, the Minister recalled that Nigeria was one of the first International Maritime Organization (IMO) nations to declare seafarers as essential workers amid restrictions at the peak of COVID-19 lockdowns in 2020.

Amaechi also described the recently launched Deep Blue Project as a commitment to ensure seafarers carry out their work in a safe and secure environment, adding that the SPOMO Act ensures that perpetuators of maritime crimes will be sufficiently persecuted.

Also speaking at the summit, the Chairman, Senate Committee on Marine Transport, Senator Danjuma Goje pledged the support of the legislative chamber to promulgate policies to enhance seafarers welfare.

His words: “Every right-thinking person can’t downplay or neglect the role of seafarers and importance of your welfare. Those who are at the helm of affairs at maritime agencies understand this and that explains the essence of this event. We will continue to promote laws that uplift the welfare of seafarers and support you from the legislative chamber.”

On his part, the Chairman, Nigerian Seafarers Welfare Development Board, Otunba Kunle Folarin noted that there is a dire need to have more quality training institutions for seafarers in the country.

Folarin also harped on the need to address the undue differences in wages, lamenting that Nigerian trained seafarers earn less than their counterparts trained in foreign institutions including those trained in neighbouring West African countries.

Noting that a high number of Nigerian seafarers have ended up in prisons, he encouraged manning agents to improve the recruitment process of seafarers to curb the unfortunate trend.

He, however, stated that health care and welfare or seafarers are also top priority as several seafarers have been victims of depression and suicides.

“Continuous training is also important with evolving technology in seafaring. There are few training institutions in the country, we need to create more.”

“With the size of Nigerian trade, we should be encouraged to invest more in seafarers development and aim to supply the world like the Philippines.”

“For over 100 years, seafarers have been serving this nation, so they deserve the commendation and welfare we are talking about today,” Otunba Folarin said.

The President of Ship Owners Association of Nigeria (SOAN) Dr. Mkgeorge Onyung described seafarers as valuable assets to the world and children of ship owners.

“We can’t sleep when we learn that a seafarer has been kidnapped or involved in an incident at sea. We do all we can to pay the ransome and get them back home because we treat them as our children,” Onyung said.

He, however, expressed delight that the Deep Blue Project would address the incidents of hijack and piracy.