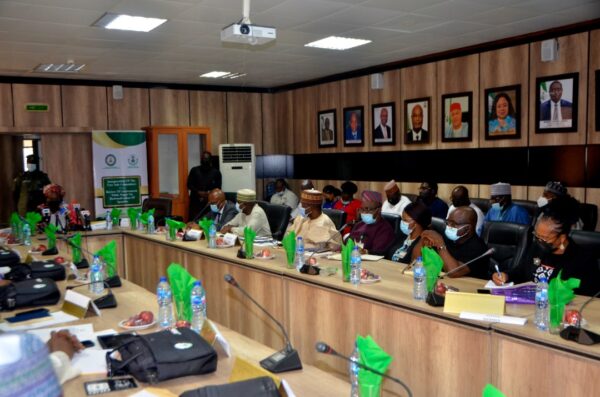 The Minister of State for Transportation, Sen.Gbemi Saraki will soon engage Flour Mills of Nigeria Plc to provide uninterrupted power supply to Apapa business community as an alternative means of power generation following the breach on power provision clause on the part of Federal Government in the port concession agreement.

Meanwhile, the Federal Government has renewed its resolve to scale down the number of Ministries, Department and Agencies (MDA) with the inauguration of a white paper committee to review MDAs created since 2014 with the aim of reducing government costs and improving efficiency as well as overlapping functions of MDAs.

Power supply has been one of the major challenges the terminal operators have had to contend with since the port concession in 2006 as they spend millions of naira daily to procure diesel and power their generators for operations, a development that increases their cost of operation especially with the prevailing cost of diesel that hovers between N600 per litre and N800 per litre. This was as against less than N150 per litre in 2006.

They had also complained of crazy bills from the power distribution companies before the mass metering exercise and most recently incessant power outage.

MMS Plus gathered that committees set up for this had been working with the Nigerian Ports Authority(NPA) to see its crystallization but with the recent briefing of the Minister who showed immeasurable interest in the project, it is expected that soon Apapa business community will have another source of power.

Although the pricing and the energy source have not been made public but with the renewed vigour in the initiative the committees are expected to consummate the discussion soon.

Confirming this, the Minister’s Special Adviser, Capt Marvin Abe, former Chief Executive Officer(CEO) of Apapa Bulk Terminal Limited, a subsidiary of Flour Mills, said, “When I was at ABTL, I introduced the initiative to the managing director of NPA, Hadiza Bala-Usman. ABTL was enjoying uninterrupted power supply from Flour Mills and has the capacity to supply the entire terminals. So I went and discussed with the chairman of Flour Mills’ board who said he had no objections if extended to the ports. So I went and told Hadiza who was excited and then formal engagements started with committees. And since I left office it has not been pulled through. The Minister got excited when I told her about it, and she is already working on it.”

However, the Secretary to the Government of the Federation(SGF),Boss Mustapha who inaugurated the committee on Friday in Abuja asked the committee to submit its report in six weeks so that implementation can begin after it has been approved by the Federal Executive Council (FEC).

In November 2021, the Federal Government inaugurated two sub-committees chaired by former heads of service of the federation — Bukar Aji, Amal Pepple and Oladapo Afolabi – on the implementation of the report of the Stephen Oronsaye-led presidential committee.

The two sub-committees were tasked with the implementation of a whitepaper on the restructuring of ministries, departments and agencies to reduce the cost of governance.

Mustapha said the setting up of the committee is part of the Federal Government’s efforts to address cost of governance which has become an issue of concern especially with the current revenue challenges in the country.

“One of such efforts was the constitution of the committee on the restructuring and rationalisation of Federal Government parastatals, commissions and agencies on the 18th of August, 2011, chaired by the former head of service, Mr. Steve Oronsaye,” he said.

“The committee submitted its report on the 16th of April, 2012, with various recommendations, such as an abolition, reduction, merger and reversion of some of the agencies to departments in ministries. Subsequently, the white paper on the report was issued in March of 2014, followed by an implementation committee that was inaugurated in May of 2014.

“However, the white paper rejecting most of the recommendations merely noted an equally greater number. Again, even those accepted were not implemented.

“You will all agree with me that the inability to implement the report of the committee on restructuring and rationalisation of federal government parastatals, agencies and commissions is costing the government highly. This cost grows higher, and the situation is further worsened by the fact that new agencies are being created on a daily basis.

“In an effort to address this challenge, the federal government, in November 2021, integrated two committees. One of the committees was to review the Steve Oronsaye report and its white paper, chaired by Mr. Gonji Bukar Aji, a retired head of civil service of the federation. The second committee was constituted to review new agencies created from 2014 to date which was chaired by Ms. Ama Pepple, another former head of civil service of the federation.

“After the submission of the Ama Pepple chaired committee report, there is a need to constitute a white paper for the committee to consider its recommendation by government, hence the inauguration today of this committee.

“I look forward to working with you on delivering this assignment. I noticed that we did not put a time limit, but I would ask that we probably have this report turned in as quickly as possible, within a period of six weeks. If you can do that, we would appreciate it, so that we will begin the process of the implementation of this report.”