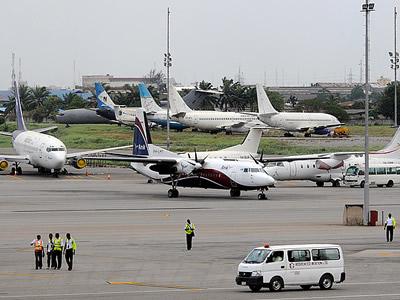 Despite claims by the Federal government to support the return to  normalcy of the nation’s economy, the hope of accessing the bailout fund and stimulus packages for different sectors of the economy remains opaque.
The aviation industry, one of the most badly hit industries which had its operations grounded for four months due to the pandemic, lost so much that it would be extremely difficult for Nigerian airlines to survive the current challenges without adequate support from government.
It is unfortunate, however, that there have been silence from the government to help industry key players to mitigate the effect of the effects of the COVID-19 pandemic.
The Central Bank of Nigeria (CBN) announced a N27billion fund for several sectors including aviation, yet there are no signs that the fund would be accessed.
The pandemic had induced financial distress on the Nigerian aviation sector but unlike other parts of the world that stimulus packages had been given to the industry to cushion the effects of the pandemic, Nigerian stakeholders are groping in the dark.
Despite the increasing welfare agitations in the aviation sector over 1000 workers including pilots have been sacked and over 149,400 direct and indirect jobs losses have been projected in the sector, according to International Air Transport Association (IATA).
The Federal Government’s earlier promised N27 billion bailout funds in soft loans and grants to the air transport sector and others should be expedited. Some airlines have submitted requests for the fund but no operator has gotten any positive feedback from the government.
However, there are indications that the pledged fund by the government for the bailout is unlikely to be sufficient to see airline operators through the crisis as major operators are taken shots already by laying – off staffs.
The continuous silence from the Federal Government could mean that this is one of the political promises known as ‘Shagari’s promise’ where the promises are made for media hype and they turnout to be empty promises.
There is serious concern about the N27 billion bailout funds on its sustainability, with the complex application and creditworthiness processes, as well as cumbersome conditions to secure the fund that are not properly spelt out by the government.
Also, the government inability to give details of who and how beneficiaries of the fund needs will pay back makes it more difficult because the loan is not for free but for a purpose. How quick the industry will recover is basically the dependent on how the loan is properly utilized.
A thriving economy is achievable through articulated goals driven by a functional system if government. It’s against this backdrop that governments need to be objective in giving the palliative to the industry. From a purely commercial perspective, it’s clear financial support is needed for Nigerian airlines to survive.
Share